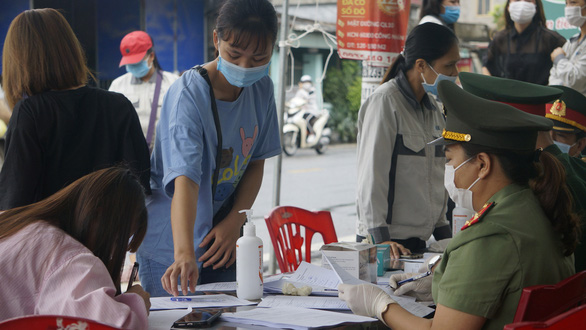 Vietnam logged a record daily count of 100 local COVID-19 cases on Thursday, most recorded in Hai Duong Province in the north, according to data compiled by Tuoi Tre News.

This is the largest daily spike in local coronavirus infections to have been recorded since the pathogen first hit Vietnam on January 23, 2020.

The Ministry of Health confirmed seven imported cases on Thursday, all having been quarantined upon arrival by plane from abroad.

Health officials have pushed for fast contact tracing to suppress the new wave while warning of far worse scenarios.

But they are still not sure about the primary source of the new local infections although at least 82 of the locally-infected patients in Hai Duong and Quang Ninh were already linked to two cases – patients No. 1,552 and 1,553.

Patient No. 1,552 is a 34-year-old Vietnamese woman working for Vietnam Poyun Electronics Co. Ltd. in Hai Duong, the Ministry of Health said in a report.

She had come into contact with a woman who left Vietnam for Japan on January 17. That woman had tested negative for the virus on January 14 and 15 prior to her departure from Vietnam.

The woman retested positive in Japan on Tuesday for the new variant, 70 percent more transmissible, that has raged in the UK recently.

Patient 1,552 was diagnosed with COVID-19 on Wednesday evening.

Patient No. 1,553 is a 31-year-old Vietnamese security guard at Van Don International Airport in Quang Ninh.

He had a fever, dry cough, and sore throat so he went to the hospital for a check-up.

The man was tested for the novel coronavirus and the result returned positive at the Quang Ninh Center for Disease Control on Wednesday evening.

Vietnam has documented 1,658 coronavirus patients as of Thursday evening, with 1,430 recoveries and 35 virus-related deaths, according to a Tuoi Tre News tally.

The country had spent nearly two months detecting no local transmission before the new clusters were uncovered.