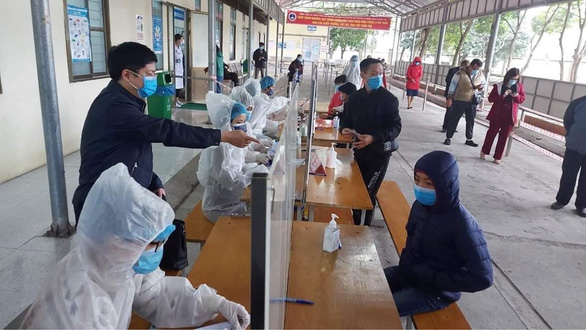 The free hotline 18006132 was launched on Friday to support the contact tracing effort of the Hanoi authority by receiving real-time reports from local residents.

Residents from outbreak areas can dial the free hotline 18006132 from Friday to file reports directly to the Rapid Information Response Team under the National Steering Committee on COVID-19 Prevention and Control, the Ministry of Health announced.

This is the second smart solution on collecting community reports on COVID-19 launched by the Rapid Information Response Team this year, after a medical declaration site was introduced on January 31.

A representative of the team confirmed that reports from the hotline will be received directly by the call center’s operators, and will be solely used for COVID-19 contact tracing, analyzing and emergency support purposes.

Incoming calls to the hotline will be answered on a 24/7 basis by a team consisting of hundreds of volunteers in Hanoi.

The hotline infrastructure has a designed capacity of receiving as much as 200,000 calls and 500,000 interactions via all channels, including phone calls, SMS and emails, per day. In case of emergency, it can be adjusted to handle as much as one million calls per day.

It is also capable of storing call history and assisting volunteers in information processing to minimize the chance of missing calls.

It also boasts high security level with two-way encryption as well as other tech solutions integrated to protect personal information of callers.

This hotline was previously mobilized to support the Rescue Information System during the flooding crisis in central Vietnam on October 2020, with over 2,000 volunteers working concurrently on the system at peak hours.

Vietnam has reported 1,957 coronavirus patients as of Friday, with 1,465 recoveries and virus-related 35 fatalities, according to the Ministry of Health.

Hanoi has so far detected 23 cases of local transmission.