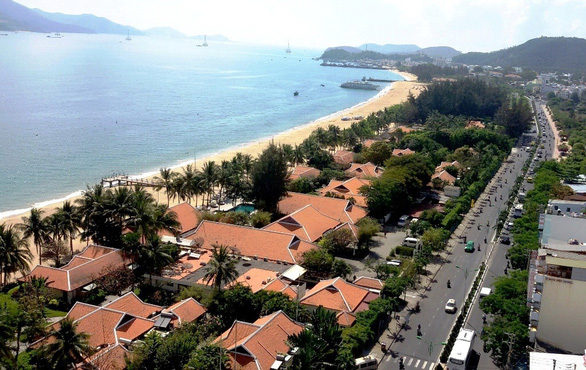 Authorities from Khanh Hoa Province in south-central Vietnam have reclaimed over 10,000 square meters of sea surface as well as a popular beach in the tourism hub of Nha Trang City for public use.

Nguyen Tan Tuan, chairman of the Khanh Hoa People’s Committee, said on Friday that the province is looking to retake the beaches of Nha Trang City, which were previously leased to businesses for commercial tourism use.

It is considered part of the province’s bid to protect the sea environs and elevate the status of Nha Trang Gulf, one of the most revered beaches in the world.

The water area to be recovered from the Nha Trang Gulf is located in the Bai Duong area of Loc Tho Ward, which was previously leased to Sovico Khanh Hoa Co. Ltd. as a private beach for tourists of their two nearby lodging facilities: Ana Mandara Hotel and Evason Ana Mandara Resort.

By 2021, the lease agreement has expired, with local authorities having no intention of renewing it and the Sovico Khanh Hoa Company also willing to return the property.

Considering this, the Nha Trang City Department of Resources and Environment has followed the province’s decision, remapped the landmarks, and handed over the Bai Duong sea area to the People’s Committee of Loc Tho Ward for use in a public beach project.

On top of that, the seashore along the area which surrounds the Ana Mandara Hotel and Evason Ana Mandara Resort has also been pronounced public property, according to leaders of the Nha Trang City environment department.

Therefore, restrictions put up by the Ana Mandara management that prevented the public from entering the beach will be abolished.

Earlier, many Nha Trang residents and visitors voiced dissent from Ana Mandara’s decision to block off the beach.

In May 2015, the management of Evason Ana Mandara was fined VND30 million (US$1,300) by authorities in Nha Trang City for their unlawful blockage of the Nha Trang beach.

According to the Khanh Hoa chairman, the Ana Mandara Hotel and the Evason Ana Mandara Resort must work on their relocation process in order to return the beach site to the authorities upon the completion of the new tourism complex Ana Mandara Cam Ranh, which is expected to take no more than 24 months as per the project permit.