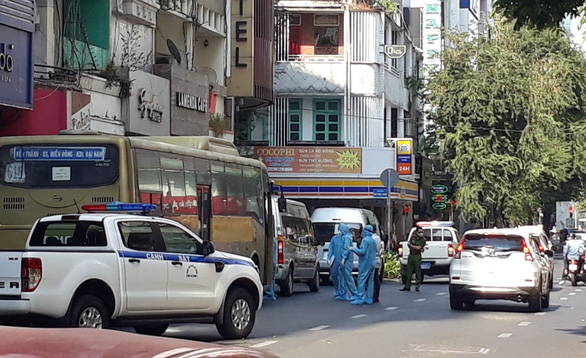 Authorities in Ho Chi Minh City detected 35 Chinese, believed to be border jumpers, at a local hotel on Saturday in the context of Vietnam having battled a new wave of COVID-19 infections since late January.

The group of Chinese arrived on a bus at the hotel on Ly Tu Trong Street, District 1 on Saturday morning, officials said.

Relevant agencies quickly came to the hotel upon their arrival.

Health workers then fumigated the hotel while authorities have isolated the venue ever since.

The 35 Chinese nationals have been sent to collective quaranine, pending coronavirus tests, as per local regulations.

Vietnam had gone nearly two months without any domestic COVID-19 cases before it found the first one on January 27 and confirmed it one day later, according to the Ministry of Health’s data.

A total of 891 local cases have been confirmed in 13 provinces and cities since then, making it the most serious wave to have struck Vietnam after the first-ever COVID-19 patient was announced in the country on January 23, 2020.

Most of the domestic infections were registered in Hai Duong Province, located in northern Vietnam, whereas 36 were logged in Ho Chi Minh City.

The city has recorded zero new cases since February 11.

Vietnam has recorded 2,509 coronavirus cases as of Sunday morning, including 1,584 local infections and 35 virus-related fatalities, according to the Ministry of Health’s data.

Border jumpers were among the confirmed transmissions.

The government is quarantining over 45,200 people who had contact with infected patients or made an entry from virus-plagued places.