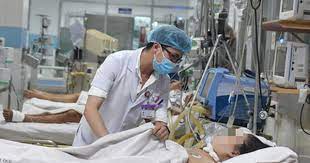 A woman is dead and five others were hospitalized after eating 'bun rieu chay’ (vegan crab noodle soup) cooked by the deceased victim’s family in the southern Vietnamese province of Binh Duong last week.

The family of 53-year-old C.N.H. cooked ‘bun rieu chay’ at a temple about two kilometers from their house in An Thanh Town, Thuan An District, Binh Duong, last Saturday, according to her husband and son.

C.N.H.’s 42-year-old sister, C.N.M., and M.’s 16-year-old child, P.T.T.T., together with three other women, were among the diners hospitalized after eating the soup.

H., M., and T. were taken to 115 People’s Hospital, Cho Ray Hospital, and the Children’s Hospital 2 in Ho Chi Minh City, respectively, after exhibiting myasthenia gravis, circulatory failure, and respiratory distress, according to the city’s Department of Health.

According to H.’s family, a jar of vegan pâté had been included in the ingredients. They suspect this was the cause of the incident.

At Cho Ray Hospital, M. was transfered to the neurology department, where she was diagnosed with encephalopathy.

During doctors’ follow-up, the female patient suffered sudden cardiac arrest and respiratory failure. The doctors were able to revive her.

Afterward, the family asked to take her home where she later passed away.

However, results of toxin tests in the patient’s urine had previously showed inorganic phosphorus content, which is commonly found in rat poison.

Meanwhile, H. and T. are still in intensive care at 115 People’s Hospital and the Children’s Hospital 2, respectively, awaiting consultation of doctors from Bach Mai -- a top hospital in Hanoi.

The patients were also given the antidote to Clostridium botulinum, the main agent identified in the vegan pâté that allegedly caused the poisoning.

As for the three other women, one case, born in 1979, was hospitalized on Wednesday while the remaining two, born in 1999 and 1978, were admitted on Thursday night at 115 People’s Hospital.

The two cases hospitalized on Thursday night have been given oxygen and have seen their muscular strength weaken, according to Dr. Tran Van Song, deputy director of 115 People’s Hospital.

The case hospitalized on Wednesday was also given the antidote to Clostridium botulinum, with her muscular strength having improved.

However, the hospital has run out of the antidote.

The new batch of the antidote to Clostridium botulinum is expected to arrive at the hospital with doctors from Bach Mai.