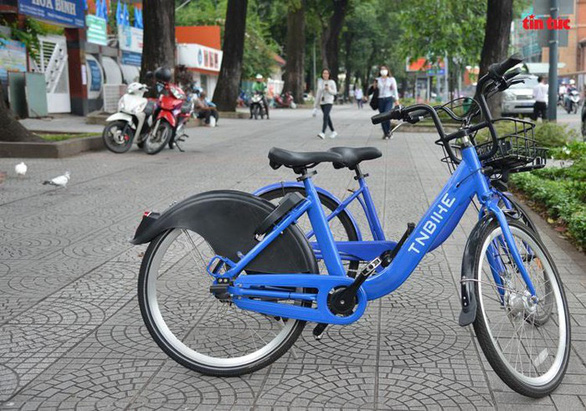 Ho Chi Minh City authorities have given the nod to piloting a public bicycle project in District 1 for 12 months, with bicycles to be placed on sidewalks for everybody to rent from August.

The approval of the pilot project, called Mobike, was announced by the People’s Committee Office in a notice on Monday.

Accordingly, the project investor, Tri Nam Group Joint Stock Company, will be entitled to use sidewalks at 43 locations in District 1 for placing bicycles for rent, said the office.

The investor is not allowed to use such places for any other purposes, the office added.

Local media quoted the investor as saying that the service will be on stream from August.

Each of the renting points will have 10-20 bicycles equipped with a smart lock and a GPS positioning device.

Bicycle renters are required to use the Mobike app on their cellphones to identify the nearest renting point where bicycles are available for rent.

Clients then use the code-scanning app to unlock the vehicle at that renting point.

Before using this service, renters may pay the charge directly or via their bank accounts or credit cards.

As proposed by the investor, bicycle rent rates will be based on service use time, such as VND5,000 and VND10,000 tickets for every 30 minutes and 60 minutes of use, respectively.

The above rates are for reference only and the official prices will be announced after being approved by the city government.

The types of monthly, quarterly, and annually tickets will be issued soon, the investor said without specifying a date.

Service users in the project’s initial stage, ranging from one to three months, will be given free-of-charge tickets for their first 15 minutes of bicycle use, the investor added.

For anti-theft purposes, service users are required to provide their personal information for verification.

Each bicycle for rent is equipped with an identification card, and the service operators will use a central software system to identify where the rented bicycles are as well as who are using them.