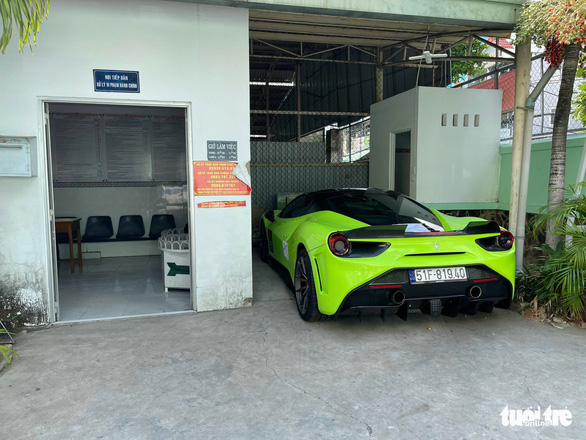 The People’s Procuracy of District 8 in Ho Chi Minh City has approved the prosecution of a Ferrari driver for opposing local law enforcement officers.

Legal proceedings against Pham Lam Duy, 33, from Binh Thanh District, have been initiated by the police department of District 8, the procuracy said on Thursday.

Duy was taken into police custody that same day.

Nguyen Thi Truc Giang, 33, from District 4, and Nguyen Vinh Phu, 31, from District 8, faced the same charge as Duy and put under house arrest for impeding officers’ ability to implement the law.

Duy was driving a green Ferrari 488 GTB, numbered 51F-819.40, when a traffic patrol team pulled it over on Duong Ba Trac Street in District 8 at around 10:50 pm on May 9 for not having a license plate affixed to the front of his vehicle.

Captain Hoang Thanh Luan informed Duy that all automobile drivers are required to have license plates attached to both the front and rear of their vehicles, citing a government decree on administrative violations in railway and road traffic.

Duy responded by claiming his front number plate had fallen off in a collision and that he had not had enough time to reattach it.

He also refused to present relevant documents to the inspection team.

After a drawn-out argument, Duy began swearing at Captain Luan so he was handcuffed.

Officers from the police department of Ward 1 in District 8 were called to assist in the case.

Giang recorded the entire situation on one cellphone while using a second to call Phu to the site.

As the inspection team began booking Duy and preparing to impound the supercar, Duy had Phu get into the vehicle and start the engine.

He also asked Giang to sit on the vehicle in order to obstruct officers’ ability to impound the vehicle.

The situation lasted from about 11:30 pm to 2:00 am, causing a crowd of about 100 onlookers to congregate at the scene, blocking traffic in the process.

It only ended when Duy and Giang said they were so tired that they needed to be taken to the hospital.

Fifteen minutes later, Phu got off the car and police brought it to the impoundment lot.