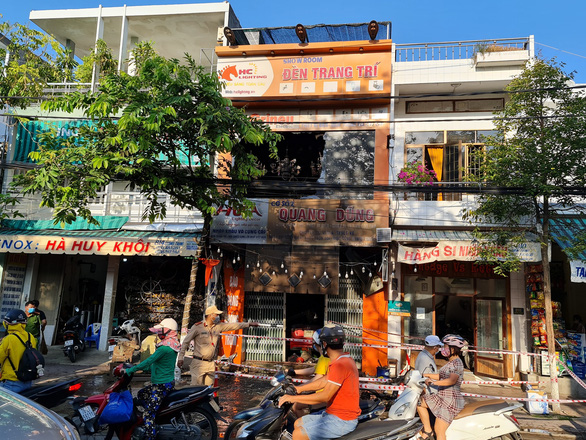 A fire suddenly broke out at an electric shop in Quang Ngai City in the namesake central province on Saturday morning, killing four people of a family, including a pregnant woman, local sources reported.

The tragic event occurred at Quang Dung electric store in Chanh Lo Ward, Quang Ngai City, at around 1:00 am on Saturday, locals said.

The witnesses narrated they discovered their neighbor’s house was on fire after they were wakened by the burning smell and smoke from the blaze, which later developed quickly.

They called fire police and tried to enter the house, but they failed as its door had been locked.

At that time, there were four people inside the three-story shop and they could not escape as the blaze had covered the only entrance of their house.

Rescuers had to break a glass wall on the second floor to make access to the victims. However, they faced difficulties since the thick smoke from the fierce fire could not get out because of no air vents.

When rescuers could eventually make their way into the house, they found all the four already dead, including a six-month pregnant woman.

The fire, which was put out after an hour, burned up all electric goods, as well as a car and other assets, in the shop.

The four victims include Bui Phuoc T., 35 years old, and his 34-year-old wife and two children aged three and six.

Local police have cordoned off the fire scene for investigation into the cause of the fire.