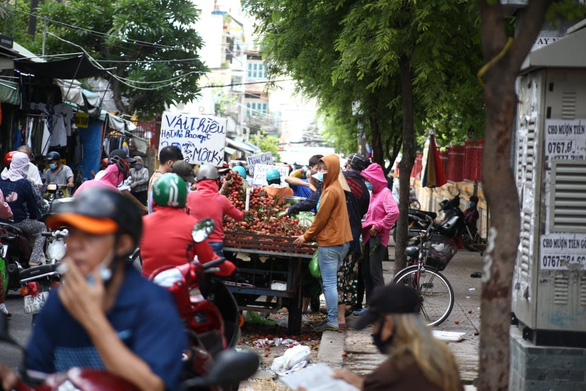 Various makeshift markets in Ho Chi Minh City had remained open as of Sunday even though city authorities required them to shut down in a bid to curb rising COVID-19 transmission.

As the virus has spread to every district of the city, local authorities decided to strengthen the social distancing mandate, having been in place for three weeks, by banning gatherings of more than three people in public, suspending taxi services and other means of public transport, and shutting down makeshift markets until further notice, starting Sunday.

They were allowed to enter the market freely, as body temperature and health declaration checkpoints were barely functioning.

A street vendor said she was not informed about the shutdown mandate before arriving at the market that morning.

“Many other sellers are also not informed of the shuttering of the unofficial market, so we still open our stalls at 4:00 am as usual,” she stated.

Meanwhile, footfall at stalls inside Ba Chieu Market, which is recognized as an official market and is allowed to stay open, fared much worse.

Discussing with Tuoi Tre, Huynh Thanh Truong, head of the management team at Ba Chieu Market, said the failure to inform sellers and local residents led to the persistence of unofficial markets on Sunday morning.

“We received the shutdown mandate at midday on Saturday, when most of the morning peddlers had gone home," Truong said.

“We could not find a way to reach out to them in time, which is why they still showed up on Sunday morning.”

Truong also cited manpower shortage, which was caused by an ongoing lockdown order at the People’s Committee building of Ward 1 and Ward 2 that housed several officials, as the reason for the ineffective response.

Aiming to deal with the situation within the day, local authorities had to call for support from district-level officials.

In the meantime, a large crowd was also seen around Pham Van Hai Market in Tan Binh District, with monitoring efforts from local authorities proving futile.

The market management cooperated with ward-level officials to inform people about the market ban since the early morning, but sellers and buyers immediately resumed vending in the area after officials had left, Thai Binh Son, head of the management of Pham Van Hai Market, told Tuoi Tre.

“Many of the vendors bring groceries and essential items, which is why they want to sell out within the day,” Son said.

Droves of vendors and sellers were also reported at Cay Queo, an unofficial market in Binh Thanh District.

Sellers there were notified of the shutdown, said Hanh, a stall owner in the market.

However, they kept stocking new items, only less than the normal quantity.

The clearance of makeshift markets has driven more customers to official places.

At Nguyen Thuong Hien Market in Binh Thanh District, various grocery stalls sold out within a few hours of opening.

However, the crowd in the market raised concerns about social distancing compliance, as narrow paths made it hard for shoppers to maintain a safe distance from other people.

Several other locales have doubled down on these concerns, as seen from the augmented measures of monitoring at the official Nguyen Dinh Chieu Market in Ward 4, Phu Nhuan District.

Local authorities have installed four checkpoints, where shoppers would undergo body temperature checks and medical declarations before they get to enter the premises.

Bao, a local resident, said she is happy to comply with these mandates, which will help curb the current outbreak in the city, which has recorded over 1,700 local infections since April 27, when the fourth and worst virus wave broke out in Vietnam.

The country has documented more than 10,000 domestic cases in 42 out of its 63 provinces and cities since then.