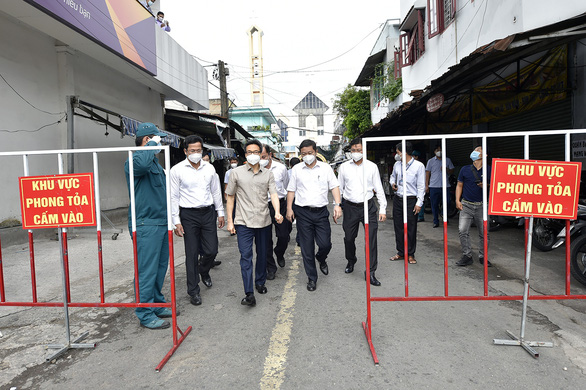 Ho Chi Minh City authorities have decided to up the ante in social distancing measures to struggle with the escalation of COVID-19 transmissions in Vietnam’s fourth and worst-ever coronavirus wave.

The whole city will go into 15 days of extensive restrictions on Friday, Nguyen Thanh Phong, chairman of the municipal People’s Committee, said at a press conference on Wednesday evening.

All residents are required to follow the prime minister’s Directive 16 to curb the raging virus, he said.

The directive forbids public gatherings of over two, bans non-essential businesses and services, and restricts travels to and from infection clusters.

Public transport, including buses, taxis, and ride-hailing vehicles, is suspended while people are told to keep a two-meter distance in social interaction.

People are required to stay home unless they go out for food, medicine, or other emergencies.

City officials have already closed down many major wet markets as coronavirus infections had been found there.

These measures are at a higher level than the enhanced social distancing drive that has been ongoing in the city since May 31.

The Delta variant, which was first detected in India, has hindered efforts to suppress the fourth virus wave, which erupted in late April, because of its rapid contagion and ability to inhibit vaccine efficacy, chairman Phong said at the press conference.

The virus will be kept at bay if everyone strictly adheres to all the restrictions, he believed.

Health authorities have prepared for a scenario where they have to treat up to 20,000 patients, according to the People’s Committee.

Experts have told local media many times that 80 percent of the patients recorded in the fourth wave in Vietnam exhibit mild to zero symptoms.

After more than a year of success in containing the coronavirus, Vietnam has been grappling with its resurgence since April 27.

The Ministry of Health has recorded 19,924 local infections, including 314 announced on Thursday morning, ever since.

Ho Chi Minh City is leading the table with 8,385 patients, followed by Bac Giang Province with 5,678.

The nation has logged 23,385 cumulative patients since the pathogen first hit it early last year, according to the health ministry’s data.

Recoveries remain at 8,557, including 480 announced on Tuesday, whereas virus-related fatalities stand at 102.

The country has administered 3,960,956 AstraZeneca vaccine doses to medical workers, teachers, factory workers, and other frontline staff since it rolled out inoculation on March 8.