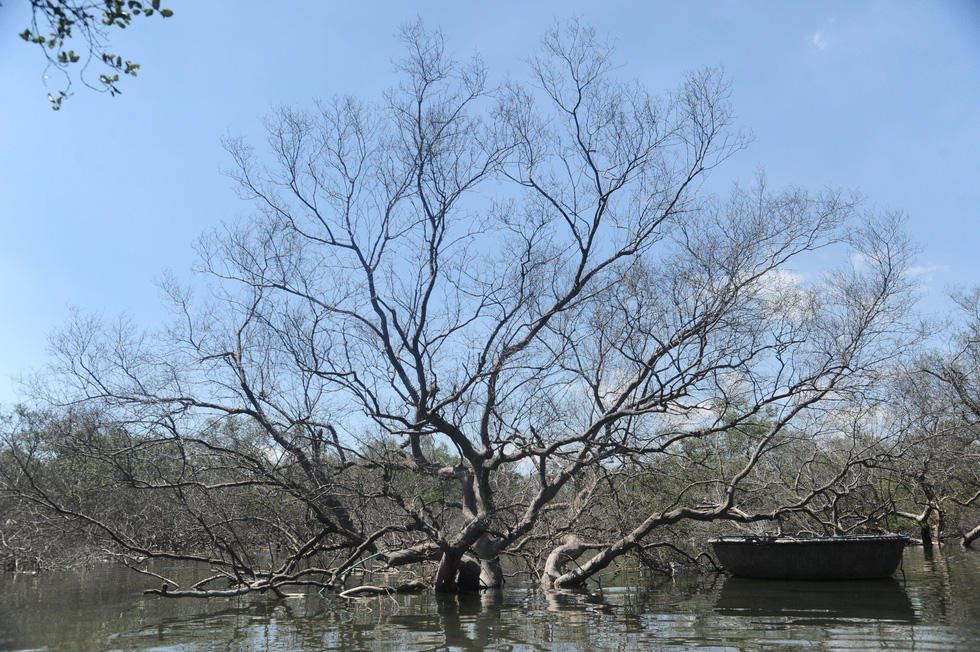 A considerable part of mangrove trees in Nui Thanh District, Quang Nam Province, Vietnam has died off from unidentified reasons.

As witnessed by a Tuoi Tre (Youth) newspaper correspondent on Thursday, mangrove trees along the coastal pathways of Dong Xuan Village in the central province's Nui Thanh District have died en masse, with noticeably leafless branches and dried trunks.

The dieback emerged in early 2021 and is continuing to spread, local residents stated.

Nguyen Van Chinh, 64, from Dong Xuan Village, said mangrove trees do die each year, albeit sporadically, but the death rate has significantly increased after the locale was hit by two back-to-back typhoons in October 2020.

“We don’t know why the trees have died, but it’s such a shame seeing the once-thriving forest fades away,” Chinh said.

“At this rate, the whole forest will disappear soon."

On top of dieback concerns, the locale is facing problems with garbage, which is strewn all over the edge of the forest and exudes a foul smell

Mangrove forests are covering over 50 hectares of the place, with half being natural resources and the other being human-cultivated, according to Nguyen Ngoc Vinh, deputy chairman of the Tam Giang People’s Committee.

In light of the dieback, local authorities and residents fear that reduced mangrove land cover may cause the area to be more vulnerable to the imminent typhoon season, which usually runs from June to November.

“We don’t know why they die as much this year, as mangrove trees tend to push new shoots after shredding leaves,” Vinh said.

The commune leaders have reported the phenomenon to district-level authorities to solicit directions on forest conservation.

Answering Tuoi Tre, Bui Van Gat, head of the Nui Thanh bureau for agriculture and rural development, said relevant agencies have visited the dying mangrove forest for a probe, but have yet to figure out the underlying cause.

According to Gat, 7.5 hectares of natural mangrove coverage, as well as 25 hectares of cultivated forest in Tam Giang Commune, have died in this bout.

The locale is devising an action plan for forest conservation, with added budget to plant new trees and collect trash, as well as strict penalties for littering behavior that harms the mangrove area, Gat affirmed.

Mangrove forests act as a key defensive barrier for Vietnam’s coastal provinces against landslides, rising sea level and tides, but this resource has depleted over the past few decades, as coverage shrank from 408,500 hectares in 1943 to merely 270,000 hectares in 2015.

This loss is mostly attributed to deforestation by monoculture activities and hydropower projects, as well as climate change.