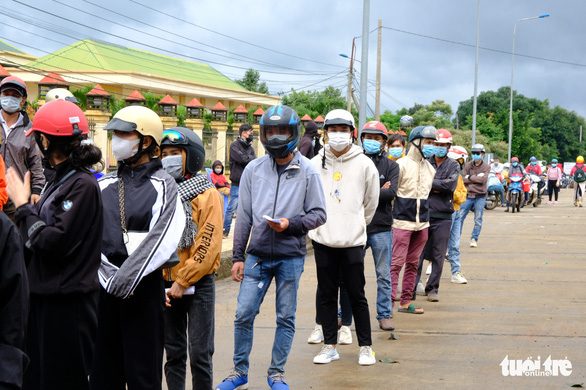 Tens of thousands of people have left Ho Chi Minh City and neighboring localities for the Central Highlands region over the past few days, right before mass social distancing in southern Vietnam aimed at curbing the increasing COVID-19 spread.

The exodus came in the context that 19 southern provinces and cities will simultaneously perform enhanced social distancing measures under the prime minister’s Directive 16 from 0:00 on Monday.

Among these provinces, the three economic and industrial hubs have earlier taken such measures to slow coronavirus infections.

Since Friday, tens of thousands of people flocked to the Cai Chanh COVID-19 checkpoint in Dak Rlap District of Dak Nong Province to perform necessary procedures before being allowed to enter the province, a gateway to the Central Highlands region.

There was a time when thousands of people came to the point at one time to carry out such procedures, including health declaration, said Dao Kim Nghiep, deputy director of the district’s health center.

Around 6,700 people congregate around the checkpoint on Friday, mainly on their personal vehicles, and the figure increased to some 10,000 on Saturday, the center reported.

At midnight on Saturday, over 1,000 travelers queued in a line stretching nearly one kilometer at the Cai Chanh checkpoint, Nghiep said.

On Sunday morning, a long line of people was seen waiting for performing procedures at the checkpoint, where staff were increased by 2-12 times to take charge of two counters for health declaration, with the support of police, soldiers, and other forces.

Nghiep said the checkpoint still needed more people to help relieve pressure on the current staff and speed up the procedures.

Most of them were returning to the Central Highlands area, except for a minority that traveled to northern places.

The Ministry of Health on Sunday morning confirmed 2,472 newly-detected coronavirus cases and 626 patients reported additionally by Ho Chi Minh City, which have taken the country’s tally to 51,002, including 10,312 recoveries.

Since April 27, when the pandemic’s fourth wave appeared in Vietnam, the Southeast Asian nation has documented 47,394 infections in 58 of its 63 provinces and cities. Ho Chi Minh City accounted for 29,081 infections.