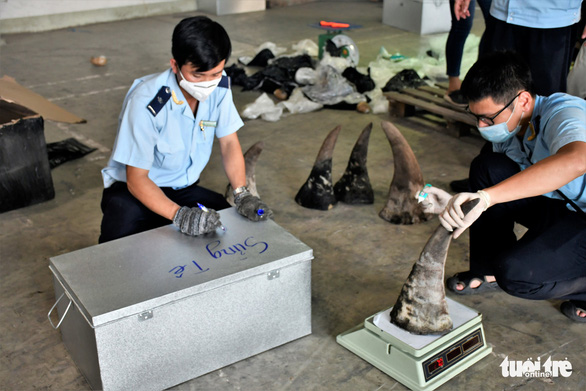 Customs officers at the Da Nang port in central Vietnam have discovered a shipment of over 100 kilograms of suspected rhino horns and more than three metric tons of alleged wildlife bones imported from South Africa with a fraudulent customs declaration.

The discovery was made when customs inspectors, in conjunction with other relevant units, examined a suspicious shipping container of goods shipped to the port of Da Nang City on Saturday.

The inspectors found 138kg of suspected rhino horn and about 3.1 metric tons of animal bones probably from rare and precious wildlife species, which were all packed in cartons placed in the container.

The shipment owner had falsely declared the imported goods were wood.

Local customs are coordinating with competent agencies to verify and handle the suspected wildlife items.

Rhino horns are strictly banned from being traded in, imported to or exported from Vietnam as the rhino and many other wild animals are on the list of endangered wildlife protected by the Convention on International Trade in Endangered Species of Wild Fauna and Flora (CITES), to which the country has been a party since 1994.

Transporting or trading wildlife parts is a criminal offense in Vietnam punishable by between six months and 12 years in prison, according to the Penal Code.

The large amount of alleged rhino horn was in transit from Africa before being transported to some Asian countries, officials said.

In March last year, a Vietnamese man was caught carrying nearly 30kg of rhino horns stashed in his suitcases after his flight from South Korea landed in Vietnam.