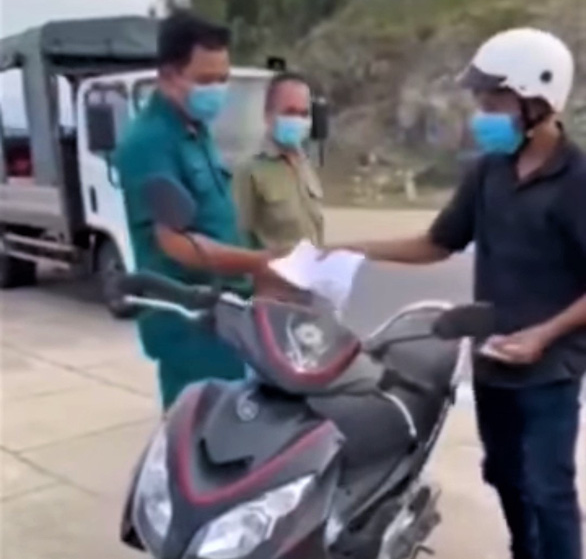 Leaders in Nha Trang City, located in Vietnam's south-central Khanh Hoa Province, have removed an official from his mission as the head of a ward-level COVID-19 prevention committee for saying “Bread is not staple food” to a motorcyclist.

The dismissal came after a video recording the inappropriate attitude and word choice of Tran Le Huu Tho, deputy chairman of Vinh Hoa Ward in Nha Trang, who was the head of the ward’s COVID-19 prevention committee, and some other officers was circulated online on Monday.

Tho and the officers stationed at a medical checkpoint in the ward booked T.V.E., a worker of a local tourism construction project, for riding his motorbike to buy bread and water at around 3:30 pm on Sunday.

While E. was able to show a work requirement confirmation letter stamped by his company and said that he thought he was allowed to go out for food according to the government’s Directive No.16 that is being applied in Nha Trang, Tho and his subordinates opposed him.

Tho used impolite expressions and said “bread is neither staple food nor essential food,” accusing E. of going out unnecessarily against the pandemic prevention regulations.

Tho then decided to seize E.’s motorbike registration, driver's license, and vehicle, according to the video, which was later verified to be filmed and spread by the deputy chairman himself.

Tho did not imagine the video would provoke a public outcry as people have criticized him for his rude manner and expressions as a public servant.

On Monday evening, leaders of Nha Trang City dismissed Tho from his leading position at the COVID-19 prevention committee in Vinh Hoa Ward.

That position has been taken by Nguyen Thi Hoa, chairwoman of Vinh Hoa Ward, according to Tran Van Dong, secretary of the local Party Committee.

“Currently, Vinh Hoa Ward authorities are waiting for city leaders’ further decisions on handling Tho for speaking and behaving inappropriately toward citizens while on duty,” Dong said.

Nha Trang City has been placed under social distancing as per Directive No. 16 since July 9, with people requested to stay home and only make outdoor trips for food, medicine, emergency treatment, and working at essential businesses.

In the letter, Khanh said the People's Committee of the city ordered functional forces in Vinh Hoa Ward to return his motorbike and related personal documents, as well as not to impose any administrative fines on the worker.

The chairman also reprimanded Tho for not having a thorough understanding of Directive No. 16, leading to improper handling in E.'s case.

At the same time, the leader said he apologized for and admitted his shortcomings in the organization and implementation of the directive.

Khanh added that he looks forward to the understanding and support from E., as well as every citizen, for the city's efforts during the pandemic situation, while pledging to handle Tho as per the regulations in the immediate future.

Meanwhile, leaders of Vega City Joint Stock Company, which operates the construction project that E. is working at, also said they will give the man an official job at the project so that he will no longer work for a subcontractor like before.