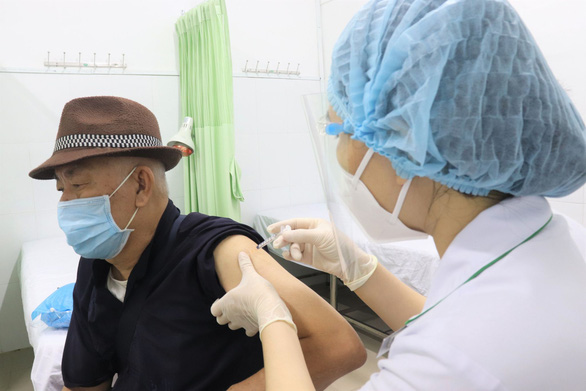 Ho Chi Minh City has started its fifth immunization phase for residents belonging to designated priority groups, with a target of administering 930,000 jabs from three brands.

The fifth vaccination phase commenced on Thursday morning at 615 immunization points and is expected to last for two to three weeks, said the municipal Department of Health.

Among the vaccine doses used in this phase, 235,000 were produced by Moderna, 55,000 by Pfizer and BioNTech, and the rest by AstraZeneca and Oxford University.

This inoculation phase is intended for 15 priority groups, with residents aged 65 and older, as well as people with underlying health conditions, such as chronic kidney disease, diabetes, chronic obstructive pulmonary disease, being asked to receive jabs at hospitals while others have been directed to vaccination points throughout the city.

Up to 200 people are expected to be immunized per day at each point during the phase, and each ward or commune is required to arrange at least two injection points, the health department said.

Each team is comprised of one screening doctor, one injection nurse, a second doctor, 11 nurses for post-injection monitoring, and one administrator. The teams are to begin work at 7:30 am each day.

Every vaccination site is required to be equipped with all necessary medical equipment and strictly comply with epidemic prevention and control regulations.

COVID-19 vaccination certificates must be granted to people after they have been injected, local health authorities required.

The numbers of people who had received their first and second COVID-19 vaccine shots in Ho Chi Minh City have amounted to nearly 978,000 and over 62,000, respectively, as of Thursday.

These numbers correspond to 10.87 and 0.69 percent of the city’s population of over nine million, the COVID-19 Vaccination Portal reported.

The city has recorded over 43,700 infections since April 27, when the pandemic’s fourth wave erupted in Vietnam, with thousands of cases added each day.

The Ministry of Health on Thursday morning confirmed 2,967 new COVID-19 infections, including 2,965 domestic and two imported cases, of which 2,433 were detected in Ho Chi Minh City.

The Southeast Asian country has documented 67,473 domestic cases in this fourth wave.