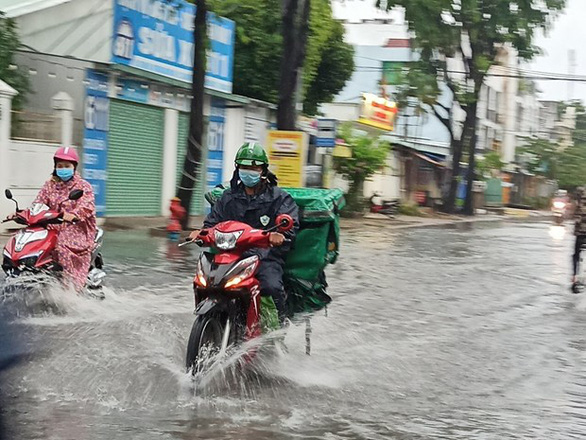 A weakened tropical depression has exhibited erratic move patterns in mainland China while bringing heavy rain to the northern provinces of Vietnam.

At 4:00 pm on Thursday, the center of this tropical depression was located in the southern coastal area of Guangxi Province in China, which is 60 kilometers away from Vietnam’s Quang Ninh Provine, according to the National Center for Hydro-meteorological Forecasting.

Wind speed in the center area varied around 40-50 kilometers per hour, with instances of gales reaching 62-74 kph.

On late Thursday and early Friday, the tropical depression moved at a speed of 5 kph, edging Vietnam’s northern coast before moving southeast at 4:00 pm on Friday and gradually weakening into a low-pressure area, the forecasting agency said.

Due to the effect of the tropical depression, northern provinces will see torrential rain until Saturday with precipitation ranging from 50 to 150 milimeters for each downpour, increasing to 100-250 milimeters and beyond for northeast locales, Co To Islands off Quang Ninh Province, and Bach Long Vi Island off Hai Phong City.

The central provinces from Thanh Hoa to Thua Thien-Hue will also experience rains of 50-150 milimeters, except for Thanh Hoa and Nghe An, where precipitation may go up to 200 milimeters per instance.

The coastal area from Binh Dinh to Ninh Thuan Provinces, in the meantime, will see waves reaching as high as four meters.

Heavy rains and thunderstorms, with chances of whirlwinds and gale winds, are anticipated for areas near the Gulf of Tonkin, as well as the coastal strips from Binh Thuan to Kien Giang Provinces.