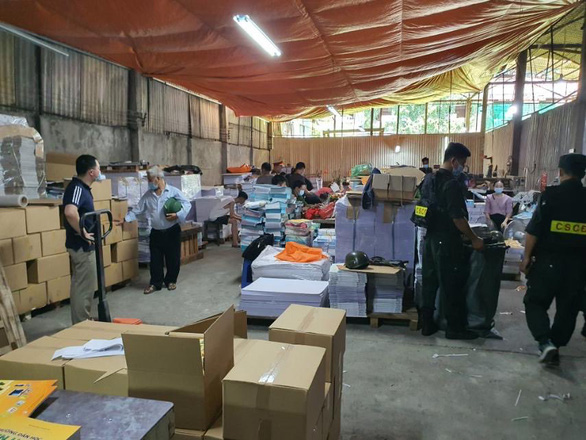 The head of a market surveillance team in Vietnam’s capital Hanoi and his two staff have been arrested for their connections with the production and sale of more than three 3.2 million fake textbooks.

Police from the Ministry of Public Security on Saturday announced that they have detained and prosecuted three persons from a unit under the Hanoi Market Surveillance Department, on charges of “abusing positions and powers while performing official duties.”

The detainees include Le Viet Phuong, the team’s leader, and his two inferiors, Pham Ngoc Hai and Thanh Thi Dong Phuong, who have been arrested as a result of further investigation into the counterfeiting and sale of textbooks with the largest ever volume in Vietnam.

The police last month arrested seven people in the counterfeiting ring that had made and sold their counterfeits in Hanoi and other northern localities.

On June 18, the ministry's police, in conjunction with some agencies concerned, raided a book printing factory in Hanoi’s Hoang Mai District and some other local workshops, and conducted searches at more than 50 facilities related to the ring in many northern provinces.

They also confiscated five trucks, around VND20 billion (US$870,000), documents and records relating to the production and sale of the fake books.

Investigators said they are expanding their investigation into the case to trace others involved and seize related assets and exhibits.