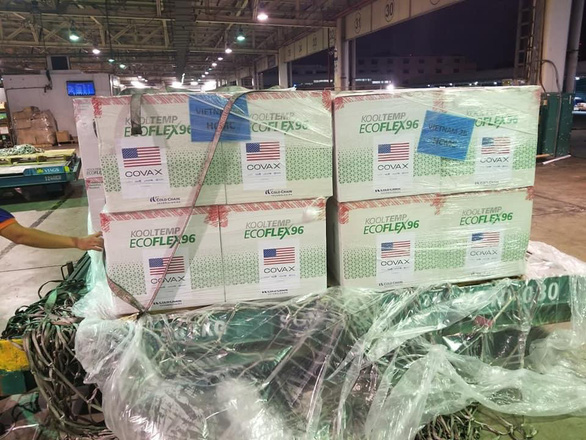 The U.S. government has delivered its second donation of over three million Moderna vaccine jabs to Vietnam, two weeks after the first shipment, amid rising COVID-19 cases in the Southeast Asian country.

Among this batch of 3,000,060 doses of Moderna vaccine, 1,499,960 shots were delivered to Ho Chi Minh City on Saturday and the rest arrived in Hanoi on Sunday morning, the Ministry of Health reported.

The U.S. has so far donated to Vietnam five million Moderna vaccine shots, with the first two million jabs delivered to the country on July 10.

The vaccine, developed by U.S.-based Moderna Inc., was approved by the World Health Organization for emergency use on April 30.

Such donations are part of the 80 million doses that the U.S. government has committed to gift 92 countries and territories, including Vietnam, to help curb the COVID-19 spread.

All the vaccine doses have been delivered through COVAX Facility, which is co-led by the World Health Organization (WHO), Coalition for Epidemic Preparedness and Innovations (CEPI), GAVI, the Vaccine Alliance, and UNICEF as the key delivery partner.

To date, Vietnam has received 7,493,300 doses of COVID-19 vaccines in four shipments through the COVAX Facility, including 5,000,100 doses of Moderna vaccine from the U.S. government and 2,493,200 shots of AstraZeneca, UNICEF said in a press release.

According to research by American scientists, Moderna vaccine, also known as Spikevax, is highly effective against the highly contagious Delta variant of the coronavirus, which has currently dominant among infections in Vietnam, including Ho Chi Minh City.

Vietnam has also obtained vaccine donations from other countries, including nearly two million AstraZeneca doses from Japan, 1,000 Sputnik V shots from Russia, and 500,000 jabs of Sinopharm from China.

Australia has promised to provide Vietnam with AU$13.5 million (US$10 million) through the UNICEF for vaccine purchase, and with a donation of 1.5 million doses of AstraZeneca from now to the end of this year.

Vietnam has set a target of securing 150 million vaccine doses to vaccinate two-thirds of its population of about 98 million people by the first quarter of next year to reach herd immunity.

The nation has received about 14 million vaccine jabs from various sources, and nearly 4.6 million shots have been administered nationwide as of Sunday, the COVID-19 Vaccination Portal said.

The numbers of people getting the first and second doses had amounted to over 4.16 million and more than 372,000, respectively, by Sunday morning, said the health ministry.

The ministry confirmed 3,979 new coronavirus infections on Saturday morning, including 3,973 domestically-acquired and six imported cases, of which 2,328 were detected in Ho Chi Minh City.

Since April 27, when the pandemic’s fourth wave erupted in the country, 91,165 infections have been documented in 62 out of 63 provinces and cities.