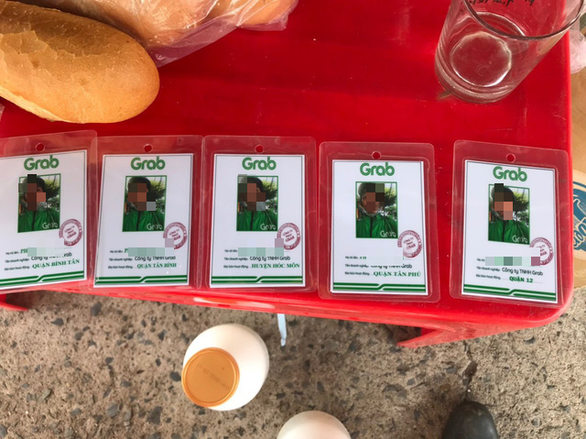 An unofficial delivery worker in Ho Chi Minh City was found on the weekend carrying multiple name tags issued by mobile solution Grab, which he used to pass COVID-19 checkpoints as an authorized driver during the ongoing social distancing period.

The man was detected on Saturday by a cohort of Go Van District police in Ho Chi Minh City as they were monitoring traffic at a COVID-19 checkpoint on Phan Huy Ich Street.

Pham Khac A., the man in question, was ordered to present his QR code-based identification and paperwork, as per local travel restrictions, after he claimed to be a delivery worker crossing the checkpoint.

In an effort to curb the rising COVID-19 caseload, the Ho Chi Minh City administration has recently tightened their existing social distancing measures, asking delivery drivers to limit their movement to a district of their choice, wear name tags and arm bands, as well as obtaining a QR code-based ID to prove their job status.

However, A. was not able to present any QR code, only handing over a name tag with a portrait photo and a seal from Grab on it.

Police found that A. was carrying five other similar tags, each claiming the owner to be able to drive in District 12, Binh Tan District, Tan Binh District, Tan Phu District, and Hoc Mon District.

He was later escorted to a nearby police station, alongside his vehicle, for further investigation.

Responding to these reports, the Ho Chi Minh City Department of Information and Communications has deemed the reselling of name tags issued by delivery platforms to be illegal, and vowed to handle those breaking the law during the current movement curb.

Signs of seal forging have also been noticed on these name tags, the department added.

Over the past few weeks, Ho Chi Minh City has emerged as Vietnam's largest epicenter of COVID-19, recording 92,270 cases out of the country’s total of 153,671 domestic infections since the fourth wave began on April 27.

In response to the rising caseload, city authorities have introduced stringent prevention measures, including an outdoor travel ban from 6:00 pm to 6:00 am the next day, shutdown of public transport and ride-hailing services, as well as rigid monitoring of delivery workers, who are deemed at high risk of COVID-19 transmission.

Due to the tight restrictions imposed upon them in the past few days, a considerable number of delivery drivers in Ho Chi Minh City have dropped out of their job, causing a dearth in the workforce and driving the delivery fare on applications like Grab, Ahamove, and Now sky-high.