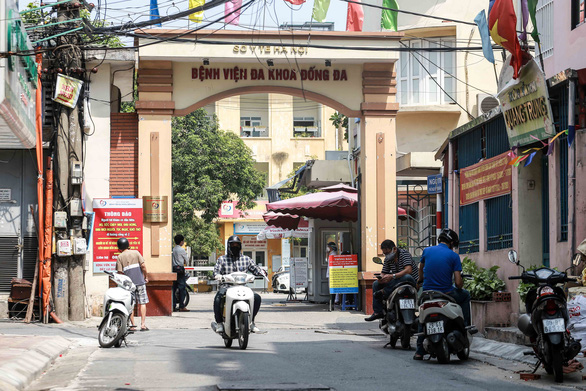 Authorities in Hanoi have decided to shut down the microbiology department of a district-level general hospital after an employee was confirmed as a COVID-19 patient.

The city logged 17 new coronavirus transmission cases from 6:00 pm on Tuesday to 6:00 am on Wednesday, with one being a medical practitioner at Dong Da District General Hospital, the municipal Center for Disease Control (Hanoi CDC) announced on Wednesday morning.

L.K.T.O., 43, a practitioner at the microbiology department of Dong Da District General Hospital, is among the newly-detected COVID-19 cases, according to Hanoi CDC.

After having a sore throat on Tuesday, O. was tested and received a positive result the same day.

The result prompted the microbiology department to be sealed off and all medical practitioners in the hospital to undergo testing.

The leader affirmed that the hospital is screening their workers for COVID-19 every three days, and they are upholding Hanoi’s ‘four-on-the-spot’ mechanism, which means the practitioners must work, have meals, maintain patients’ treatment, and rest after work at the same place.

Hien also revealed that O.’s main work duty is to convey testing samples to Hanoi CDC and Ba Dinh District's Xanh Pon Hospital, and that she tested negative for the coronavirus on July 30.

“So far, we have yet to detect the source of O.’s infection. Her workplace is not linked to the patient treatment wards,” Hien said.

“We have cordoned off the microbiology department to perform safety protocols.

“The hospital has also detected five individuals as O.'s direct contacts, all of whom have been sent to quarantine centers.”

“We have also tested over 400 practitioners and received negative results for all of them.”

Meanwhile, the leaders of Vien An Ward in Ung Hoa District, where O. resides, have found 13 direct contacts and 18 indirect contacts of the infected medical worker.

On July 19, the drugstore was sectioned off after three of its staff members tested positive for the virus.

Hanoi authorities started contact tracing on the same day and found a total of 17 cases linked to the drugstore within three days, national radio VOV reported.

Two other cases announced on Wednesday morning were found related to the cluster at food supplier company Thanh Nga, which provides meat for dozens of convenience stores and large supermarkets in Hanoi.

On Sunday, Hanoi CDC detected 21 infections at the Hai Ba Trung District-based company after an intern was confirmed coronavirus-positive at Xanh Pon Hospital a day earlier.

Following the detection, several supermarkets and convenience stores that use Thanh Nga as their supplier were deemed at high risk and were promptly shut down.

Hanoi has documented 1,429 COVID-19 cases, with 864 found in the community, since the fourth wave emerged in the Southeast Asian country on April 27.

As of Wednesday morning, Vietnam had documented 174,461 coronavirus cases, with 50,831 recoveries and 2,071 deaths, according to the health ministry.