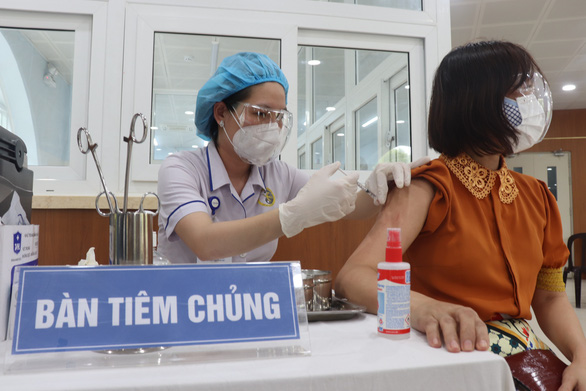 Two shipments totaling over one million AstraZeneca vaccine jabs will be delivered contractually to Vietnam on Friday, while the country expects to receive more than 12 million vaccine doses from different sources from now through September, local sources said.

These shipments will be delivered under a 30-million dose contract between Vietnam Vaccine Joint Stock Company (VNVC) and the vaccine’s developer, British-Swedish firm AstraZeneca, a source told Tuoi Tre (Youth) newspaper on Friday.

Before the upcoming deliveries, nearly 4.4 million doses of AstraZeneca have been sent to Vietnam on several occasions under this contract, VNVC reported.

At a meeting on Thursday, Deputy Prime Minister Vu Duc Dam said the country will receive more than 12 million doses of vaccines from different sources from now through September.

This vaccine volume is expected to include 10 million doses developed by AstraZeneca and the remainder by Pfizer-BioNTech.

Out of the vaccine supply, 670,000 doses will be delivered to Vietnam by the end of this month or in early September as a donation from the French government through the COVAX Facility, the Ministry of Health reported.

Last week, at a meeting with the research team that is working on the Nano Covax COVID-19 vaccine, which is being developed domestically by Nanogen Pharmaceutical Biotechnology JSC, the ministry assessed that the vaccine is safe and produces good immunity response.

Regarding the vaccine, which officially entered the third phase of clinical trials on June 11, State President Nguyen Xuan Phuc on July 29 asked health authorities to promptly authorize it to make the first Vietnamese vaccine available soon to drive back the coronavirus spread.

Vietnam has targeted to secure 150 million COVID-19 vaccine doses to inoculate two-thirds of its 98 million-strong population to reach herd immunity as soon as possible amid surging infections in many localities across the country.

However, the Southeast Asian nation has obtained only over 19 million jabs from the COVAX Facility, contractual purchases, and donations, local sources said on Wednesday.

As of Friday morning, more than 13.36 million vaccine doses have been administered nationwide, according to the National COVID-19 Vaccination Portal.

Vietnam has documented 246,568 COVID-19 cases, including 244,173 domestic and 2,395 imported infections, since early 2020, when the pandemic kicked off in the country, the ministry reported on Thursday evening.

Since the pandemic’s fourth outbreak erupted in the country in late April, 242,063 infections, or 99.13 percent of the caseload, have been recorded.