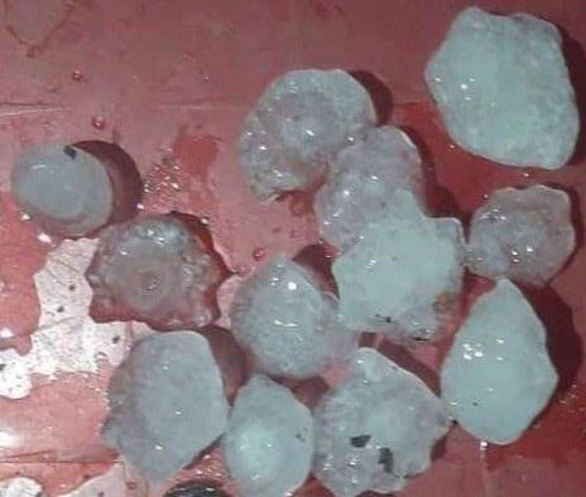 The hail was recorded in the eastern part of the southern city and many areas in Dong Nai’s Bien Hoa City, with a number of hailstones having diameters from three to five centimeters, the Southern Center for Hydrometeorological Forecasting reported.

Hailstones are formed when the air disturbances push the moisture up to meet the low temperature zone, Le Dinh Quyet, deputy head of the station, told Tuoi Tre (Youth) newspaper on Sunday.

A subtropical high-pressure area has been pushing moisture from the ocean onto land, causing rains and strong air disturbances in the southern region, he explained.

“Hail usually occurs in May and June or at the end of the rainy season, so it is unusual in this period.”

In Dong Nai, while heavy rains covered many parts of the province on Sunday evening, hail took place in many wards of Bien Hoa City that borders Ho Chi Minh City to the west.

Hail often appears at the beginning of the rainy season, but this year’s rainy season is erratic, said Nguyen Phuoc Huy, director of the Dong Nai Center for Hydrometeorological Forecasting.

Rains have appeared irregularly and there have been periods in which scorching heat was recorded in daytime while rainstorms and lightning occurred at night, Huy said.

People should limit being outdoors during thunderstorms and should not stand near metal windows or objects when indoors, for such things may serve as lightning conductors, the director advised.

From Monday, the southwest monsoon will get stronger so the southern region will have sunshine in daytime and scattered showers in the evening and at night, with heavy rains and rainstorms likely hitting some areas, said the Southern Center for Hydrometeorological Forecasting.

Wind gusts, whirlwinds, and lightning may occur during thunderstorm rains from Wednesday onward, the center forecast.