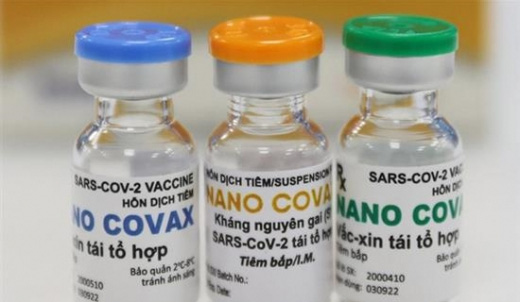 Vietnam’s self-developed vaccine Nano Covax has got approval from the medical ethical agency of the Ministry of Health, making it closer to getting licensed for emergency use in the country.

The vaccine profile has been referred to the ministry’s Advisory Council for the Registration of Circulation of Drugs and Medicinal Ingredients for approval within three days after the receipt date.

If this council approves for vaccine to be registered for circulation, the ministry will within 20 days grant a license for emergency use of the vaccine, which has been developed by Ho Chi Minh City-based Nanogen Pharmaceutical Biotechnology JSC.

After successfully conducting the previous trials, which began on December 2020, the research team has entered phases 3a and 3b of the trial process with the participation of 13,000 people, who have been administered two doses.

Among these vaccinated people, only two reported anaphylaxis and all of them later recovered, while the rest had some common reactions such as pain, itching, swelling at the injection site, nausea, and mild fever.

The trials have showed that the geometric mean concentrations of Anti-S IgG reached 57.56 U/ml, an increase of 218.93 times compared to that before injection, and the seroconversion rate amounted to 99.2 percent.

The trial results have also proved the vaccine meets all the requirements on safety and immunogenicity.

The research team has said they will continue the current trial phase and propose the health ministry grant a conditional emergency license for the vaccine.

If Nano Covax is licensed, Vietnam will become self-sufficient in COVID-19 vaccines, marking an important milestone in the country’s epidemic prevention and control effort.

The second vaccine, Covivac, being developed by Vietnam’s Institute of Vaccines and Medical Biologicals, is expected to begin the third phase of testing in September.

Vietnam has so far received some 27 million vaccine doses from different sources while it needs to secure 150 million doses to inoculate two-thirds of its 98-million population.

As of Friday evening, more than 18.8 million doses had been administered nationwide and the numbers of people receiving the first and second vaccine jabs had reached over 16.6 million and 2.2 million, respectively, the health ministry reported.

Since the pandemic hit the country in early 2020, the country has documented 410,366 COVID-19 cases, including 10,053 deaths, equivalent to 2.4 percent, or 0.3 percentage points higher than the global mortality rate.

The coronavirus has spread to 62 out of the country’s 63 cities and provinces, with Ho Chi Minh City topping the list with nearly 199,500 cases, followed by Binh Duong and Dong Nai with over 94,700 and 24,400 cases, respectively.