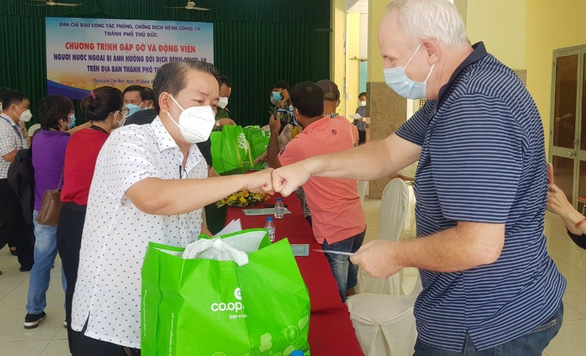 The People’s Committee of Ho Chi Minh City has announced a plan to bring disadvantaged foreigners to a centralized facility where they will be provided with food and medical care.

The beneficiaries of this policy include foreign citizens who are studying, working, or visiting the southern Vietnamese city and struggling to afford accommodation and necessities due to COVID-19 restrictions.

Those foreigners will be accommodated in a centralized facility with 100 beds at the headquarters of the 10th Infantry Division at 25 Pham Thi Quy Street in Phu Xuan Commune of Nha Be District until city authorities declare the control over the COVID-19 pandemic.

The municipal People’s Committee also requested that departments, agencies, and units ensure that these foreigners’ needs are met during their stay at the centralized facility and that the facility is managed in a secure, orderly, and sanitary manner.

Once the pandemic subsides, authorities will help coordinate stable accommodation and food for these foreigners.

Currently, the Ho Chi Minh City Department of Foreign Affairs, in coordination with foreign representative agencies, and the People’s Committees of all districts and Thu Duc City are reviewing the number of needy foreigners residing in their jurisditions.

The districts’ authorities shall encourage them to go to the centralized facility to receive aid.

The foreign affairs department shall assume the prime responsibility for ensuring humanity and timeliness during the implementation of the aid and act as a communication bridge between foreign representative agencies and the foreigners.

Ho Chi Minh City, whose population is roughly nine million, has been the epicenter of the coronavirus crisis that has hit Vietnam since late April, with more than 388,000 local infections and over 14,700 deaths.

Those figures account for half of the country’s total 790,755 patients and about 77 percent of its 19,301 fatalities, as recorded since the COVID-19 pandemic first appeared early last year.

So far, health workers have administered over 6.8 million first vaccine doses and more than 3.5 million second shots to residents aged from 18 years old in the city, according to the national COVID-19 vaccination portal.

The corresponding figures for the country are some 32.6 million and nearly 9.4 million.

Vietnam has closed its borders to international arrivals since March last year but it still grants entry to foreign experts, skilled workers, diplomats, and Vietnamese repatriates.