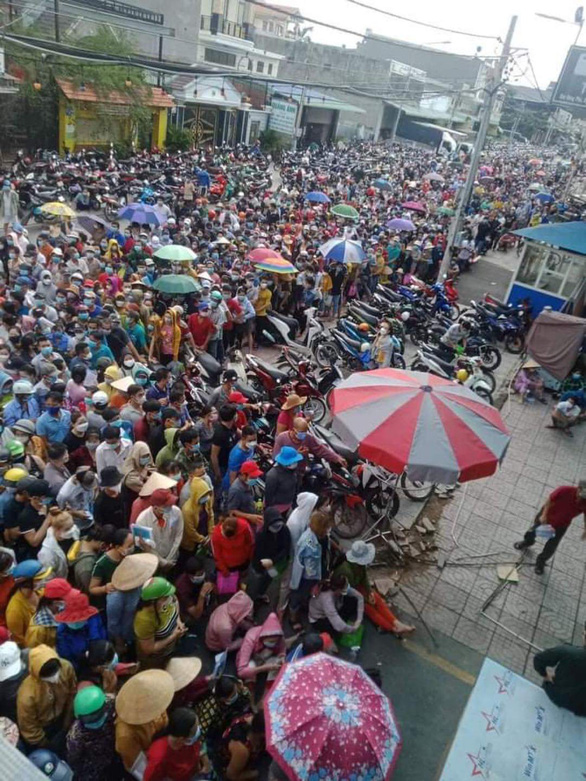 Tens of thousands of people, mainly factory workers, have flocked to COVID-19 vaccination sites in the Vietnamese southern province of Binh Duong to compete for the second Sinopharm vaccine shots due to concerns about low vaccine supplies, local sources said.

The Steering Committee for COVID-19 Prevention and Control of the province’s Thuan An City convened an urgent meeting on Monday to improve the organization of vaccination after many inoculation points had become overcrowded and chaotic due to a slew of vaccine seekers.

One of these venues was in Thuan Giao Ward, where workers gathered in large quantities without keeping a required distance, resulting in an overload.

The same situation was seen at some other sites in Ben Cat Town and Thu Dau Mot City, where many people waited in long lines for Sinopharm second-shot inoculation or had to leave unvaccinated due to insufficient vaccine supplies.

N.T.L., a 51-year-old man in Thuan Giao, said he was given the second jab at 3:00 pm on Monday after standing in waiting lines from the morning.

Such a chaotic situation involving thousands of people might cause high risks of COVID-19 spread, the man said worriedly.

Talking to Tuoi Tre (Youth) newspaper, a local official said competent agencies should have publicized the volume of jabs available to avoid public confusion which prompted people to flock to inoculation sites to check it out.

In fact, the vaccine supply is enough for vaccinating all residents, and around 722,000 people have received the second doses, said Thuan An City’s steering committee.

“By Monday afternoon, over three million out of nearly 4.6 million doses of different vaccines allocated to the province have been administered to residents, so the remaining 1.5 million shots is enough for immunizing all locals in the days to come,” the committee clarified.

Nguyen Huu Chau, head of the Steering Committee for COVID-19 Prevention and Control of Thuan Giao Ward, said that many people who had no vaccination tickets or used fake tickets also gathered at inoculation sites.

In order to ease the overcrowding at vaccination points and facilitate people in getting immunization, a local official suggested that more medical points should be set up across the city.

At the same time, private health facilities should be mobilized in vaccinating people and enterprises should be provided with vaccines so that they can flexibly immunize their workers.

Nguyen Hong Chuong, director of the provincial Department of Health, said that he had asked relevant health units to immediately rectify the vaccination organization and submit relevant reports.

Since the pandemic hit the country in early 2020, Binh Duong has documented 222,427 COVID-19 cases, including 2,199 deaths, according to the Ministry of Health’s data.

The province ranks second in COVID-19 suffering after Ho Chi Minh City, whose infections and deaths have reached 408,758 and 15,834, respectively.