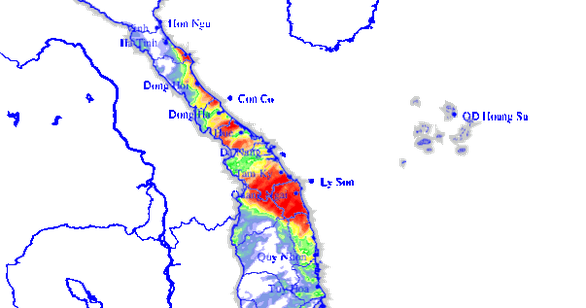 Provinces in central Vietnam will experience torrential rains, as well as chances of typhoon and tropical depression landing, which threaten flooding and landslides in the next few days, the Vietnamese government has warned.

According to the document, heavy rains over the past few days in central and Central Highlands provinces, namely Quang Binh, Quang Tri, Quang Nam, and Quang Ngai, have enkindled flooding and mudslides, which in turn led to human casualties.

The premier sent his condolences to citizens over their suffering in catastrophe-hit areas, specifically families of flood and landslide victims.

Such provinces must prepare measures to curb the damage of flooding and its consequences through rescue efforts, evacuation of residents from flood-prone areas, food rationing for flood victims, and consolidation of dams, the document stated.

From Saturday to Monday, mid-central provinces, particularly Quang Nam and Quang Ngai Provinces, would see precipitation ranging from 200 to 400 millimeters or even more, while Quang Tri Province, Thua Thien-Hue Province, and Da Nang are forecast to experience rains of 50-150 millimeters and beyond, the center said.

Meanwhile, Binh Dinh, Kon Tum, and Gia Lai Provinces would see precipitation of 100-200 millimeters, even going up to 250 millimeters.

By the Saturday morning, flood levels had risen in the rivers of Thua Thien Hue and Quang Ngai and been poised to reach alarming levels, said Phung Tien Dung, an NCHMF staff member.

“From now to Monday, flooding is likely to emerge in the rivers of Quang Nam, Binh Dinh, and Kon Tum Provinces,” Dung said.

Dung also notify the public of threats of flash floods and landslides in upland areas, as well as inundation in lowland and waterfront areas in the provinces from Thua Thien-Hue to Quang Ngai.

The situation in these areas may be exacerbated with the arrival of a tropical depression, which is likely to form in the East Vietnam Sea on Sunday and Monday before hitting central provinces in the next two days, according to Nang.

“This circumstance, coupled with a cold front and the turbulence of high east winds, may bring heavy rains to central areas from October 27 to 31,” Nang said.

“The downpour directly impacted by the tropical depression may arrive on October 27-28.

“From now to the end of October, central provinces may experience up to three bouts of downpours, with total precipitation reaching 1,000 millimeters.”