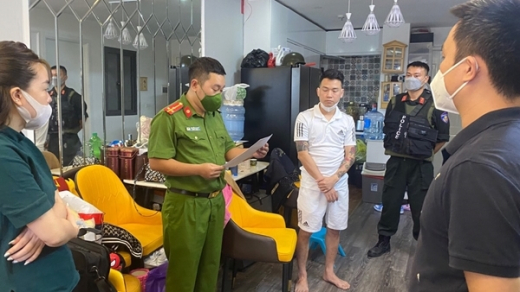 Vietnam’s Ministry of Public Security has broken up a massive online gambling ring whose transactions totaled more than VND30 trillion (US$1.3 billion).

The gambling racket was run by Do Ngoc Ha, 37, from Long Bien District, Hanoi, officers confirmed on Wednesday.

Ha was previously convicted of gambling in the capital city and several other provinces.

Aside from Ha, police also arrested Bui Hoang Son, 33, and 15 other suspects, all of whom reside in Hanoi, for gambling and organizing gambling.

Preliminary information showed that Ha and Son began learning how to gamble and organize online gambling with a focus on Baccarat – a form of casino card game – in December 2020.

The two then established a website to act as an intermediary between users and a foreign gambling server.

They put the website into operation in early January and advertised it on social media platforms to attract gamblers.

Gamblers had to create an account and purchase crypto currencies to play and win.

Ha and Son changed the name of the website in April and expanded their operation by recruiting new members and organizing events to mobilize financial investment.

They even offered gamblers insurance packages to boost their credibility.

Police investigation showed that approximately 3,000 accounts had been created, while transactions since April were valued at over VND30 trillion.