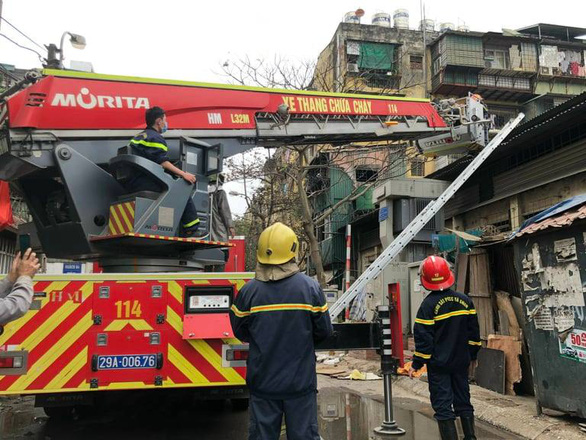 Two air-conditioner repairmen are being lauded as heroes for saving a 14-year-old girl stuck in a burning house in Hanoi on Wednesday.

The fire broke out in a three-story house down Alley 51 on Luong Huu Khanh Street in Hoang Mai District, Hanoi on Wednesday afternoon.

V.H.Y., a 14-year-old who lived in the house with her family, was unable to escape from the top floor and began shouting for help.

Trung Van Nam and Duong Ngoc Vu, who were repairing an air conditioner near the location of the incident, heard Y.’s cries and rushed to help her.

The two men scaled the roof of the burning house before rushing in and helping to evacuate the girl onto the roof.

Firefighters, two fire engines, and a ladder truck arrived at the scene shortly after to take Y. down from the rooftop, before extinguishing the blaze.

Police in Hoang Mai District are investigating the cause of the fire.