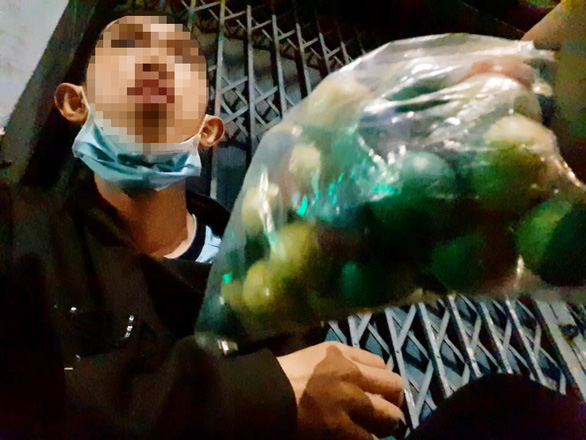 “You have to throw it away the instant you light it, or else you’ll lose your hand,” said a seller of firecrackers to a girl named Chau on January 6.

She was doing the transaction in Tan Nhut Ward, Binh Chanh District, Ho Chi Minh City. For the 100 tiny firecracker balls, the girl paid VND850,000 (US$37).

The production, purchasing, and burning of firecrackers in Vietnam were officially banned nationwide on January 1, 1995, following a decision by the prime minister then.

However, Vietnamese people still enjoy the sight and sound of firecrackers every year around the Tet, or Vietnamese Lunar New Year, holiday.

As Tet starts in early February this year, the smuggling of fireworks has increased again.

On January 7, another illegal transaction was carried out in Thu Dau Mot City, Binh Duong Province.

Tuan, the seller, demanded VND1.5 million ($66) for a set of firecrackers. He described the products as the ‘49 model’ produced in Thailand.

He only sells this model of firecracker within the southern province. For distance buyers, Tuan demands prepayment by bank transfer before shipping the product.

M.A. is one of the 4,000 members of a social network group that commercializes firecrackers, where he introduced a top-notch type for the coming Tet holiday.

In a tutorial video clip and pictures of this firecracker, A. tossed the thing under water for a field test.

He limited its use to distances under 10 meters and warned buyers to keep it away from the underaged and those suffering from a high blood pressure disorder.

After buyers from Ho Chi Minh City make a down payment of VND400,000 ($17.6), they should receive their packages after three to five days via a delivery service.

The late evening of December 24, 2021 witnessed a conglomeration of hooligans along National Road 51, in front of the Vedan Vietnam Enterprise Company in Long Thanh District, Dong Nai Province.

They were coming from Ho Chi Minh City and neighboring Binh Duong and Dong Nai Provinces.

The thugs sent continuous strings of fireworks and firecrackers into the sky amid their own shrieking, howling, and motorbike races.

It can be deadly to practitioners and cause fires and damage to buildings, assets, and the environment.

“Firecrackers can also scare people and affect their mentality,” he added.

The expert urged an increased public awareness of the consequences from unlawful owning and lighting of firecrackers in order to prevent unwanted accidents.

Extra efforts should be made by the authorities to curb the smuggling and selling of the banned commodity.

Simultaneously, firecracker advertisements and tutorials on how to make them have to be removed from relevant social networking sites.

Cracking down on smugglers

They confiscated a total of 55 kilograms of firecrackers of different sorts.

The arrestees claimed that they had purchased the firecrackers over the Internet and planned to sell them to make a profit.

Do Duc Duong, a 39-year-old resident in Phuoc Long Ward of southern Binh Phuoc Province, was captured on January 1 with 104 kilograms of firecrackers.

An investigation into this case was launched immediately.