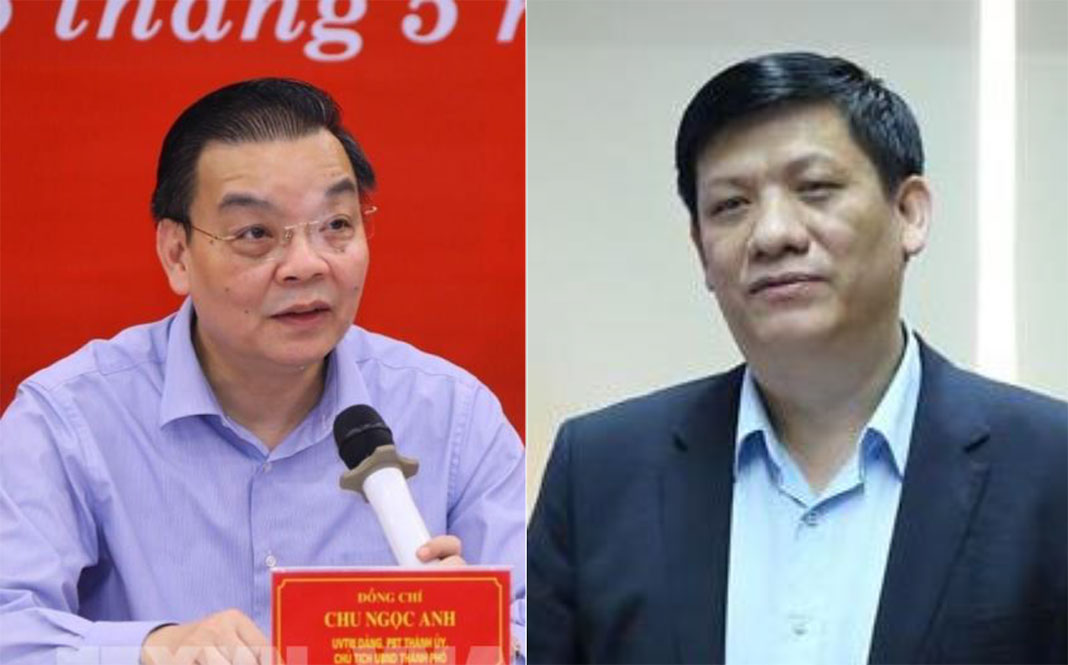 Vietnam’s Ministry of Public Security announced on Tuesday evening the arrest of Chu Ngoc Anh and Nguyen Thanh Long, just hours after they were dismissed from their respective posts as chairman of Hanoi and health minister due to their involvement in Viet A Technology Corporation’s gouging of COVID-19 test kit prices.

Long and Anh are now under investigation for abuse of powers and positions in performing official duties, Lt. Gen. To An Xo, chief of the Ministry of Public Security Office, said, adding that police were searching their residences and workplaces.

At a meeting in the afternoon, all deputies of the Hanoi People’s Council agreed to remove Anh, 57, from the post of chairman of the municipal People’s Committee.

This is the second time the Hanoi People’s Council has removed the chair over the past two years.

Meanwhile, the National Assembly also approved resolutions on the dismissal of Long from the positions as the deputy of the 15th legislature and the health minister over his wrongdoings related to the COVID-19 test kit scam.

At its extraordinary meeting in Hanoi one day earlier, the Party Central Committee decided to expel the two officials from the Communist Party of Vietnam.

On June 4, Party General Secretary Nguyen Phu Trong presided over a meeting of the all-powerful Politburo and the Secretariat to mull over disciplinary measures against the top Party officials in the 2016-21 tenure of the Ministry of Science and Technology and the Ministry of Health.

The meeting concluded that Anh, who served as Party secretary and minister at the Ministry of Science and Technology in the 2016-21 term, and Long, who was also Party secretary at the Ministry of Health at the time, had committed degradation in political ideology, morality and lifestyle; breached Party and state regulations; and violated the don’ts for Party members and the rules on responsibility for exemplary performance.

Their violations caused serious consequences and big losses to the state budget, left negative impacts on the COVID-19 response effort, caused public concerns, and created a poor impression on the reputation of the Party organizations, as well as the two said ministries.

Therefore, the Politburo required the Party Central Committee to discipline Anh and Long for their violations.

The Party Central Committee called the extraordinary meeting to consider disciplinary measures against these two members.

Given their grave infringements of Party and state regulations, the committee decided to deprive Anh and Long of their Party membership.

Also on Tuesday, Pham Cong Tac, former Deputy Minister of Science and Technology, was arrested, being accused of violating regulations on the management and use of state assets, causing losses and waste.

Earlier in late March, the Inspection Commission of the Party Central Committee concluded that the Party Committees and leaders of the two ministries in the 2016-21 term had shown a lack of responsibility and loose management, resulting in wrongdoings and violations in relation to the inflation of COVID-19 test kit prices by Ho Chi Minh City-based Viet A Technology Corporation, which was uncovered in December last year.

Viet A general director Phan Quoc Viet admitted he had directed his staff to overstate the prices of production equipment and input materials to hike the selling price of a test kit to VND470,000 (US$20.21), or 45 percent more than the original rate, to earn a difference of VND500 billion ($21.5 million).

Viet, who was arrested on December 19 last year, confessed to investigators that he paid 'commissions,' in fact illegal kickbacks, worth nearly VND800 billion ($34.42 million) to his state-owned partners who bought his test kits at the inflated prices.

Viet A had supplied test kits to centers for disease control (CDCs) and other medical facilities of 62 provinces and cities, raking in nearly VND4 trillion ($172.1 million), according to preliminary investigation results.

To date, nearly 60 suspects including officials from the two above ministries, directors of CDCs, leaders of hospitals and health departments, and some high-ranking military generals, have been detained or under criminal investigation for their involvement in the case, according to the Ministry of Public Security.