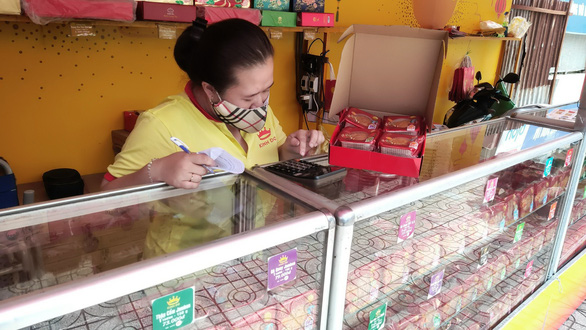 With Vietnam’s Mid-Autumn Festival just around the corner, mooncake producers and traders are jacking up their prices despite fears that price hikes might lead to lower-than-usual demand.

In just the few days of running a Kinh Do mooncake stand on Phan Dang Luu in Binh Thanh, Ho Thi Bong has already begun to fear that price increases of VND1,000-4,000 (US$0.04-0.17) might lead to shrinking demand as the festival draws nearer.

“The increase is not large, but I am worried about a decline in demand resulting from the COVID-19 pandemic," Bong said.

“Many people have seen their incomes fall so we seem to only be selling a moderate number of cakes.”

Such a rise, according to the representative, is induced by the increased cost of ingredients.

The five-star Sheraton Saigon Hotel has been less shy about pushing high-priced mooncakes.

Mooncakes produced by the hotel, many of which are stuffed with luxury fillings such as scallops, lotus seeds, and taro, are quoted at VND1.3-2.8 million ($56-120) per box.

Though the hotel expects to sell tens of thousands of cakes this festive season, it admits that it is keeping a close eye on market developments.

Price increases are minimal compared to the 15 percent spike in production cost, but plunges in demand are still a serious worry, Thuy said.

“At present, we only have a small number of customers," she added.

"Our number of mooncake outlets has also shrunk.

“Our corporate customer base has declined 40-50 percent compared to previous years.”

The Mid-Autumn Festival, which falls on the 15th day of the eighth month on the lunar calendar, is among Vietnam’s most popular celebrations and mooncakes are considered an indispensable part of the fest.

Despite concerns, the mooncake market has bounced back compared to the sluggish sales recorded during the past two years of COVID-19.