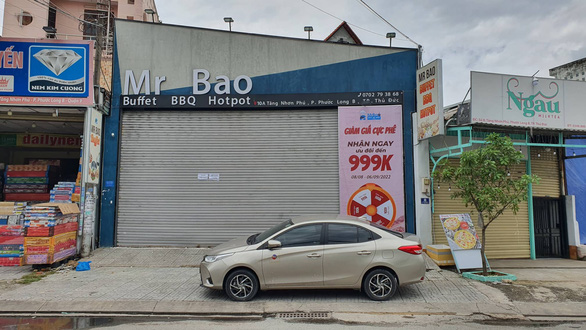 Officials on Tuesday imposed a fine totaling more than VND26 million (US$1,111) on a restaurant in Thu Duc City under Ho Chi Minh City, where methanol poisoning killed two people and seriously affected the health of six others last week.

Mr Bao Buffet BBQ Hotpot Restaurant, located at 10A Tang Nhon Phu Street, was required to pay a fine for running food services without holding a certificate of eligibility for food safety and using raw materials of unknown origin, according to the food safety management board in the southern metropolis.

Late on the evening of August 3, a group of eight people, including six employees of Mr Bao Buffet BBQ Hotpot Restaurant, threw a party at the restaurant.

They ate food bought from outside and drank a can of five liters of alcohol available at the restaurant during the feast.

On the afternoon of August 4, one of the six employees, aged 24, was found dead at a rented room in Thu Duc after showing signs of fatigue and cyanosis.

Seven others were eventually taken to the hospital after suffering serious health conditions.

One of them died at the hospital on August 5.

The remaining six people are still being treated at the hospital for methanol poisoning.

One of them is in a critical condition.

Methanol, commonly known as industrial alcohol, is used in paints or as solvents among different uses, but this substance is extremely toxic to the body, doctors said.

Consuming methanol is detrimental to the heart, brain, and respiratory system and it can also cause kidney failure, cardiovascular collapse, and blindness, they warned.