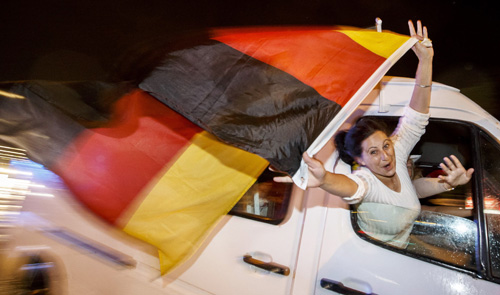 As Germany fired home their World Cup winning goal, the Maracana erupted. Thousands broke into song, but the chant that echoed around the stadium was in Portuguese - not German.

The host nation was celebrating that rivals Argentina would not be lifting sport's most prized trophy. Usually winning is everything, but on this occasion watching your neighbors lose was almost as good.

This was all the stranger given Germany had crushed the Brazilian dream of winning on home soil just days earlier in a 7-1 drubbing that spun South America's largest nation into a melancholy of soul searching.

But the rivalry with Argentina runs deeper.

"Germany have brought great happiness to the Brazilian people," said Pedro Cozzolimo, 27, a lawyer from Rio de Janeiro. He was dressed in the black and red kit Germany wore in the semi-final against Brazil. "Thank you Germany," he shouted.

Another Brazilian was shown on the big screen inside the stadium kissing the crest on his Flamengo shirt - which also play in black and red.

It had almost been so different.

About 100,000 Argentines had arrived in Rio for the final, many driving the thousand-odd miles without a ticket or a place to stay.

Some camped on Copacabana beach, others were allowed to pitch tents or sleep in their vans in Rio's Sambodromo, where the city's carnival procession is held.

Brazilians, already knocked out, found it hard to stomach the invasion of bragging Argentine fans.

On the metro to the stadium, hundreds of Argentines made the carriage bounce. "We have occupied Rio, the Brazilians got cold feet," they chanted - taunting their hosts. A small, quiet group of Germans huddled in the corner and the Brazilians were silent too.

Argentina's confidence off the pitch, however, was matched by Germany's skill and composure on it. For many it will be a long drive back to Buenos Aires.

Commentators who like to speculate whether the Brazilian sense of relief will have a lasting impact after the World Cup should be mindful, however. As President Dilma Rousseff presented the trophy to Germany's captain Philipp Lahm boos rained down from the stands around.

But for most Brazilians it was far better than Rousseff passing the trophy to Argentina's Lionel Messi. That would have been almost unthinkable.