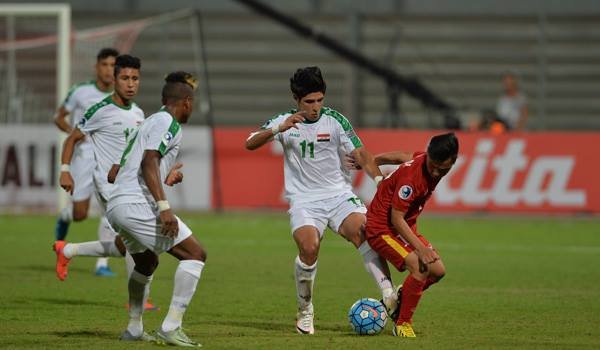 Vietnam only needed a draw in their final Group B match to advance to the final eight teams competing for the AFC U-19 Championship, and by pulling a 0-0 draw against Iraq late Thursday night in Bahrain, the team did just that.

Vietnam’s coach Hoang Anh Tuan proudly declared at a press conference the following day that the goalless draw with Iraq was proof that his men have “written a new chapter in Vietnamese football history.”

And indeed they have.  Coach Tuan and the Vietnamese squad’s victory marks the team’s first-ever advancement into the knockout phase of an Asian championship.

The team advanced into the quarterfinals as the Group B runner-up with five points in three games, while their rivals in last night’s game led the group with seven points.

Having already qualified for the knockout stage, Iraq used a squad with nine substitutes, while Vietnam played defensively in order to secure a draw.

Vietnam secured a surprise 2-1 win over North Korea in last week’s opener, and bravely drew 1-1 against UAE with ten men in the second group stage game on Monday.

“I am very, very proud of our players today,” Vietnam coach Tuan was quoted by the AFC website as saying after the game.

“It makes me proud to finish 0-0 against a team with better tactics, technique and stamina than us.”

Tuan’s Iraqi counterpart Abbas Atiyah also expressed his happiness with his players and “the way the team played today.”

"We did not have enough time in training camp time before the tournament, but now we are improving,” Atiyah said.

The Vietnamese will be face hosts Bahrain in their quarterfinal game on Sunday, while Iraq will clash with Saudi Arabia the same day.

Japan, Iran, Uzbekistan and Tajikistan round out the rest of the final-eight.

The AFC U-19 Championship is organized every two years by the Asian Football Confederation (AFC).

Now in its 39th edition, the U-19 Asian Championship is scheduled to run between October 13 and 30, involving a total of 16 teams. Qatar are the reigning champions.

As South Korea’s role as host qualifies it automatically for the tournament, if they are among the top four teams, the fifth-placed team will also qualify.