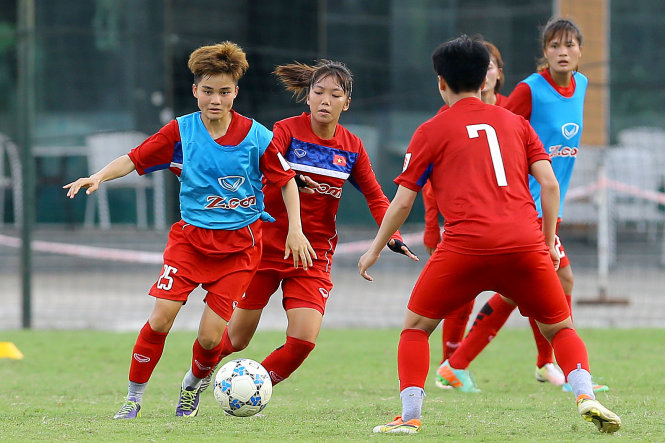 When it comes to football, the Vietnamese male players only need to look to their female counterparts for inspiration.

The Vietnamese women have so far won gold at the Southeast Asian (SEA) Games four times, while the men’s team have never gone better than silver since the country was reunified in 1975.

At the upcoming 2017 SEA Games in Malaysia next month, the women’s team have been tasked with securing their fifth title, while the men’s team are targeting a place in the final.

The Vietnamese women’s squad, consisting of 35 players, has been training since early June. Head coach Mai Duc Chung said this was a huge advantage for the women, as they have two full months to prepare for the Games.

“Our goal is to win the gold medal, with the girls’ main rivals coming from Thailand and Myanmar,” Chung said.

The coach said the training sessions have improved his players’ stamina.

“I strongly believe in the strength of my team at this moment and hope that they can achieve their target,” he said.

The Vietnam women’s football team will participate in another training camp from August 1 to 11 in Japan, during which they will play three friendly games against local clubs Okayama Yunogo Bella, an Okayama Select Team and China’s Guangdong team.

With only five participating teams, Malaysia, Vietnam, Thailand, Myanmar and the Philippines, the women’s football competition will be a round-robin format in which each contender meets each other once.

There are no age restrictions on the women's teams.

Vietnam won women’s football gold at three SEA Games in a row from 2001 to 2005, then snatched another at the 2009 edition in Laos.

The men’s team, having finished second in five SEA Games editions, will travel to Malaysia with 20 players and a ten-member coaching staff.

The men’s football competition at the SEA Games is only open to under-22 players.

“Our goal is to advance to the final,” Tran Quoc Tuan, deputy head of the Vietnam Football Federation, confirmed.

Coach Nguyen Huu Thang told the media at a press conference on Tuesday that he would not put pressure on his players in Malaysia.

“You can predict nothing in football,” he said.

“Even when you are well prepared, you still need some luck to win and I hope luck will come to us.”

The men’s football competition at the 2017 SEA Games consists of 11 teams in two groups. Vietnam is in Group B with Thailand, Cambodia, Indonesia, Timor-Leste and the Philippines.