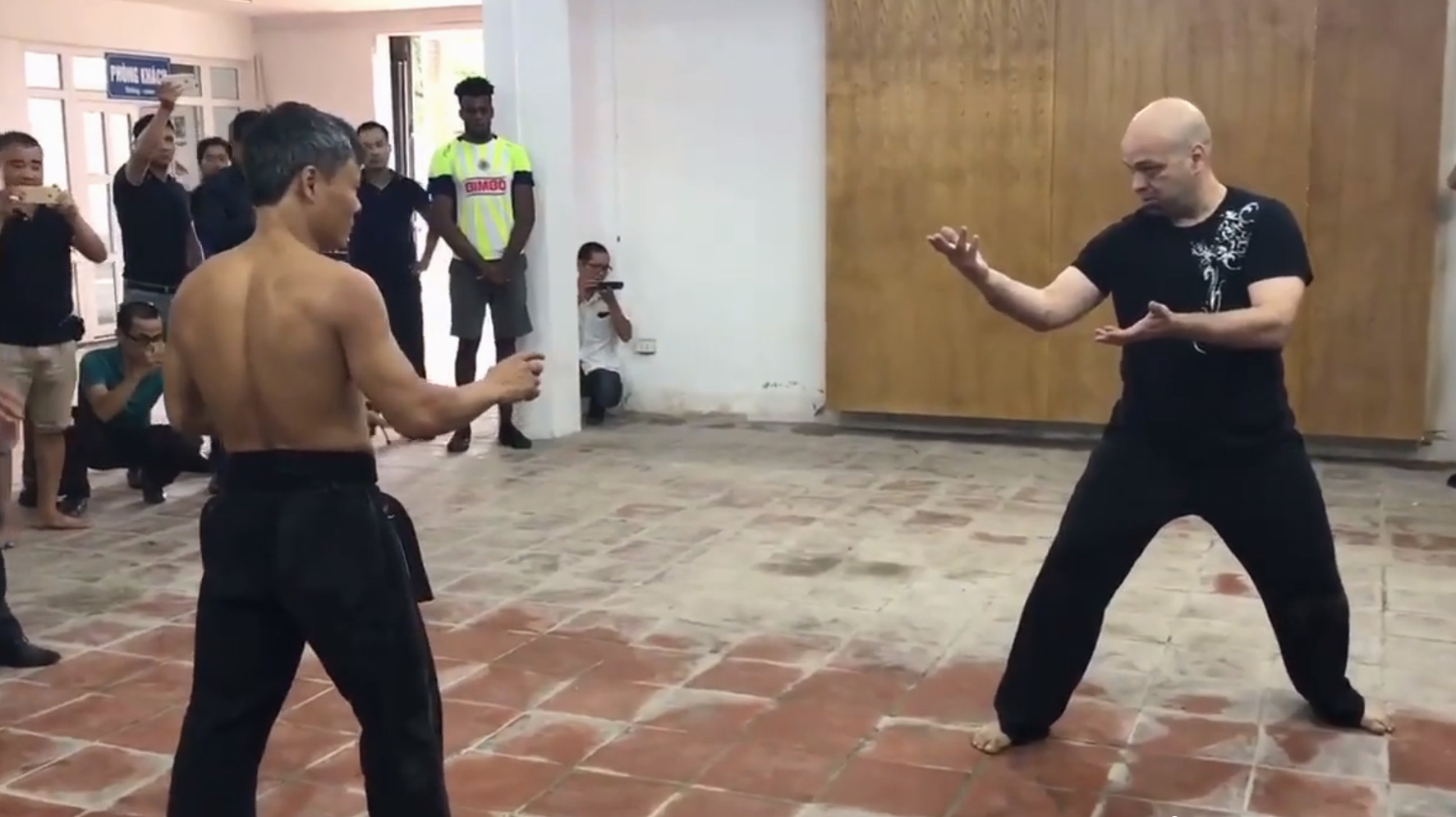 A recent sparring match between a Canadian Wing Chun master and his Vietnamese karate counterpart in Hanoi has left local officials confused about whether, and how, martial art duels should be regulated.

The sparring match between Canadian Wing Chun master Pierre Francois Flores and Vietnamese karate master Doan Bao Chau in Hanoi on Wednesday had been much anticipated by the Vietnamese public, though for reasons not related to the match-up itself.

The technique, which was captured in a compilation of videos filmed during Nam Huynh Dao practice sessions, had attracted both attention and ridicule from the public, with many viewers calling Kiet out for being nothing but a fraud.

Flores’ challenge was rejected, as Kiet humbly invited the Canadian master over for lunch instead.

It was then that karate master Doan Bao Chau showed up and invited Flores to a friendly duel, scheduled for Wednesday in Hanoi.

Flores dominated the fight, which lasted for three minutes and ended with Chau being knocked out after three continuous hits to the face and head.

Footage of the friendly duel between Doan Bao Chau (L) and Pierre Francois Flores in Hanoi on July 12, 2017

Though the two masters happily accepted the outcome of the duel by sitting down together over lunch with their disciples, the event has raised questions about how local administrators should regulate such sparring matches, a long-standing tradition among martial artists.

According to Hanoi’s Department of Culture and Sports, there are currently no available laws to regulate fights and duels of such nature.

“If it was an organized competitive match or competition that sold tickets, it would have been required to obtain a permit from Hanoi’s Department of Culture and Sports,” said Nguyen Ngoc Anh, director of the Department of Public Sports under the Vietnam Sports Administration. “Since it was a friendly duel between two consenting individuals, we cannot restrict their freedom to fight or ask them to obtain a permit.”

According to a representative from Hanoi’s Department of Culture and Sports, local authorities have been confused as to how they should approach to regulate these types of fights, as this is the first time a friendly match between martial artists has received such public attention.

“Martial arts masters and practitioners engage in friendly duels to improve their skills,” said Le Kim Hoa, deputy chairman of the Federation of Traditional Vietnamese Martial Arts. “These fights revolve around exchanging skills and learning to better oneself, so winning isn’t the ultimate goal of the participants.”

“However, from the perspective of a martial artist, I think the fight [between Flores and Chau] should not have been held since there was too big a difference in physical shape between the two masters,” Hoa added.

Pierre Francois Flores weighed 91 kilograms and measured 180 centimeters tall, while Chau weighed a mere 62 kilograms with a height of 161 centimeters.

“Though the match was friendly, there are always risks involved in a full-contact fight,” Hoa said. “That’s not to say fights that attract much public attention should be permitted in advance so as to be better organized for the sake of both martial artists.”

“On the part of administrators, they should introduce regulations on how big a difference in weight and age between the fighters is allowed, as well as require the availability of medical workers in case of injuries during the fight,” Hoa said.

Japan's women's softball team got the Tokyo 2020 Olympics off to a winning start for the hosts on Wednesday, a boost for the pandemic-postponed Games that the World Health Organization sees as "a celebration of hope" even as COVID-19 cases surge