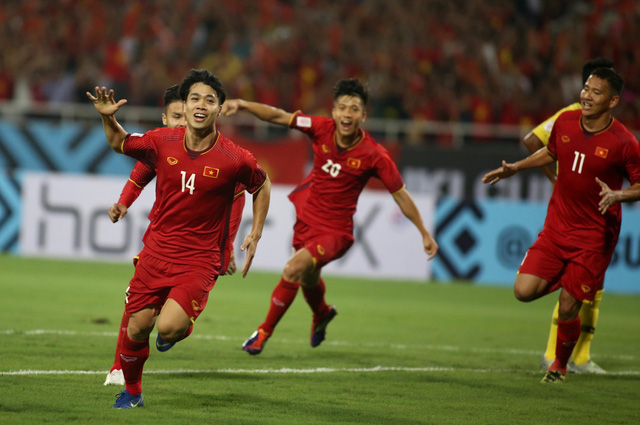 Vietnam are enjoying a smooth run at the ongoing 2018 AFF Championship as they defeated Malaysia 2-0 in their second Group A game right at the home pitch in Hanoi on Friday night.

The home side cruised a comfortable victory over the Harimau Malayas with one goal in each half by Nguyen Cong Phuong and Nguyen Anh Duc to claim their second consecutive triumph in the tournament so far.

It all started in the 11th minute when Anh Duc could not properly kick the ball after receiving a pass from Van Duc from the left swing. But star striker Cong Phuong quickly made a smart move and take advantage of the opportunity to score the opening goal for Vietnam.

Shortly after taking the lead, the Golden Stars played defensive and counter attack, with the Vietnamese defenders successfully preventing most of the phases by Malaysia, thus leaving no chance for their opponents to threaten goalkeeper Van Lam.

Only 15 minutes into the second half, the ‘Duc duo,’ Anh Duc and Van Duc, teamed up again and doubled the score for Vietnam.

From a fast ball into the middle, Van Duc performed a pass through the Malaysian defenders, before Anh Duc broke the offside trap and converted, settling the 2-0 victory for Vietnam.

At the other Friday’s game taking place at the same time, Myanmar pulled off a 3-1 comeback against Laos on the latter’s soil.

Vietnam and Myanmar both have six points after two games, but the Golden Stars now rank second with a lower goal difference.

Vietnam will have a tough away game against the Asian Lions in Myanmar on November 20.

Vietnam won the AFF Championship, contested by ten nations affiliated to the ASEAN Football Federation, in 2008 and are hoping to claim the second title after ten years.