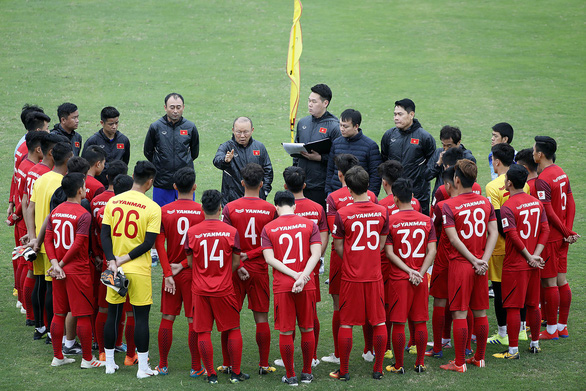 Vietnam agree U23 friendly with China in September

Vietnam U23s will play their Chinese peers in an away friendly match in September, according to an agreement between the two football federations.

The Vietnam Football Federation (VFF) has just sent a document to its Chinese counterpart suggesting the game be organized on September 7 in order not to disrupt the Vietnamese first division V-League 2 and the top-flight V-League 1.

The Chinese Football Association has yet to reply to this request.

The two federations had agreed to stage the friendly in China on September 8.

This game is meant to prepare Vietnam for the 2019 Southeast Asian Games in the Philippines in November-December, according to the VFF.

The Games will be the 30th edition of a biennial regional multi-sport event taking place from November 30 to December 11.

The VFF is trying to invite a team outside Southeast Asia to play another U23 friendly with Vietnam in Hanoi in October.

Vietnam’s coach Park Hang Seo has recommended the VFF to schedule the two games as part of his men’s preparations for the 2019 Southeast Asian Games.

After the regional multi-sport event, Vietnam U23s will train overseas before competing at the 2020 AFC U-23 Championship, where 16 teams will be drawn into four groups later.