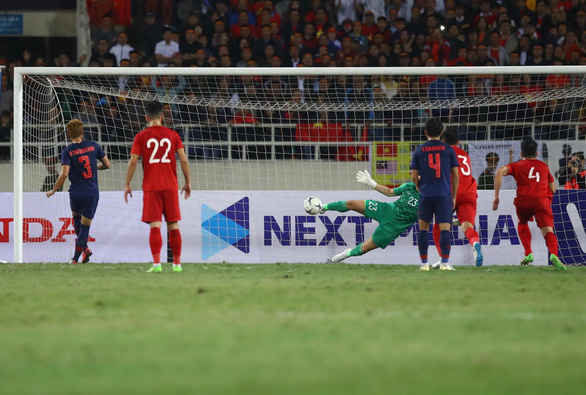 Vietnam had another scoreless tie against Thailand in the second round of 2022 FIFA World Cup Asian qualifiers in Hanoi on Tuesday, remaining atop their group with 11 points.

The regional derby at My Dinh National Stadium was action-packed with both sides targeting a three-point victory.

Thailand dominated from the start but Vietnam showed confidence with sharp counterattacks.

The Thai pressure caused Vietnam’s Doan Van Hau to make a mistake by bringing down Manuel Tom Bihr in the penalty box after a corner kick, resulting in a penalty awarded to the War Elephants in the 27th minute.

Theerathon Bunmathan took the spot kick, but Vietnam’s keeper Dang Van Lam denied him in a ‘magical’ moment with his right leg despite diving the wrong way.

A responding chance came to Vietnam almost immediately when Bui Tien Dung headed Nguyen Quang Hai’s cross from the corner, but the goal was disallowed due to a debatable foul on Thailand goalkeeper Kawin Thamsatchanan.

The Golden Dragons sent the ball into the Thai net for the second time following a left-footed volley by Nguyen Tien Linh in the first third of the second half, only for it to be ruled off-side.

Thailand threatened with several clear opportunities in the remaining time but most were denied by Van Lam, who pulled off good saves.

Eventually, neither side was able to find a way through.

The goalless draw means Vietnam will go into 2020 as Group G’s leaders with 11 points from five matches.

Thailand descended to third place with eight points after Malaysia defeated Indonesia 2-0 on the same day and took the second spot with nine points.

Vietnam will not have to play any game in the second round of 2022 FIFA World Cup Asian qualifiers until June 2020 while Thailand, Malaysia, Indonesia, and the UAE, who lost 0-1 to the Golden Dragons last Thursday, will resume their qualifying campaign in March next year.