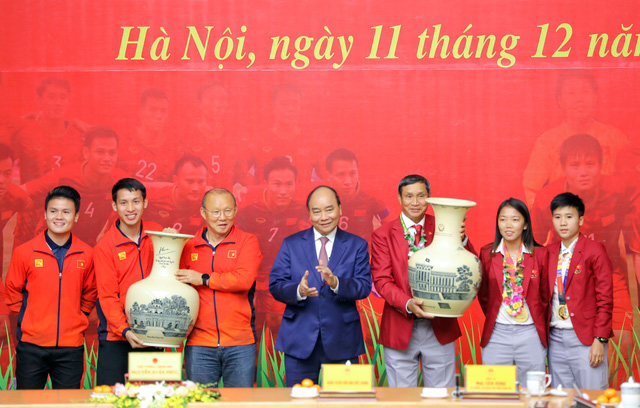 Vietnam's Prime Minister Nguyen Xuan Phuc hosted a welcome party, as well as an intimate meeting, for both the Vietnamese men’s and women’s football teams upon their return to the country on Wednesday evening after each struck gold at the 30th Southeast Asian (SEA) Games in the Philippines.

The under-22 men’s football team won their first-ever gold medal in SEA Games in 60 years after a 3-0 thrashing of Indonesia on Tuesday evening while the national women’s football squad defeated Thailand 1-0 in a 120-minute finale on Sunday night to clinch their sixth SEA Games gold medal.

The men’s football finale was also among the very last competitions at the Games, just one day before the closing ceremony was held at the New Clark City Athletics Stadium in the Filipino province of Tarlac, around 135 kilometers from Manila, on Wednesday evening.

Following Tuesday’s victory, PM Phuc invited both teams, their coaching staff, and leaders of relevant ministries and agencies to attend a congratulatory meeting and intimate party at the Government Office.

The prime minister was not the only one to offer a warm reception for Vietnam’s football champions.

As the football squads emerged from the airdrome, thousands of fans welcomed them with a storm of cheers and a sea of waving hands.

At the Government Office, the PM hailed each athlete’s courage and spirit, as well as their strong will and dedication to competition.

Earlier on Wednesday, National Assembly Chairwoman, Nguyen Thi Kim Ngan, who is currently on an official visit to Russia, sent a letter to the men’s and women’s football teams, as well as the rest of the Vietnamese sporting delegation to the Philippines, congratulating them for their achievements at the Games.

"I am very touched and proud that, though I am on an official visit to Russia, I get to hear the news that the men's football team has won the SEA Games gold medal. This is a historic moment for Vietnamese football since Vietnamese sports only became integrated with regional sports 30 years ago,” Ngan wrote in her letter.

"This result is very exciting for Vietnamese fans," she said while also congratulating all members of the Vietnamese sports delegation, especially the coaches and athletes who contributed their efforts to Vietnam’s extremely successful SEA Games campaign.

The 30th SEA Games are considered the most successful edition for Team Vietnam, as they claimed 98 gold, 85 silver, and 105 bronze medals, ranking second behind the host and outdoing third-placed Team Thailand.

At the closing ceremony, Minister Thien received a flag as a formality to take over the hosting of the Southeast Asian Games from the Philippines.