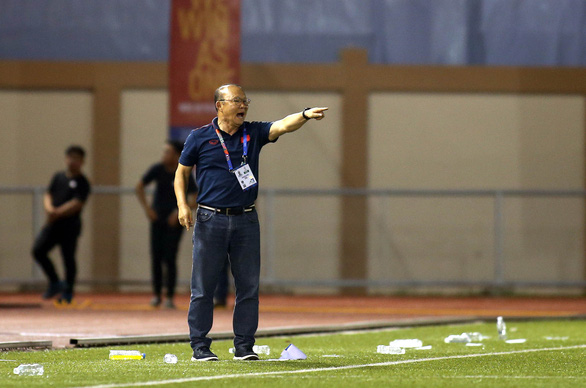 Vietnam’s football head coach Park Hang Seo has been given a US$5,000 fine and a four-game suspension for a red card he received during the final of the men’s football event at the 2019 Southeast Asian (SEA) Games in the Philippines in December.

The final match ended roughly two months ago when Vietnam beat Indonesia 3-0 to win their first-ever gold medal in the event at the regional Games in 60 years.

But it is not until recently that the Asian Football Confederation (AFC) Disciplinary and Ethics Committee has made a decision to punish Park for his confrontation with the referee during the game.

In the 78th minute, Park complained to the referee as an Indonesian player went unpunished after tackling midfielder Nguyen Trong Hoang.

As the South Korean coach reacted excessively, he was shown the red card and given the marching orders.

The AFC noted that Park had used “offensive, insulting and/or abusive language towards the referee(s)” and was engaged in “serious infringements punishable by an expulsion” under Article 47 of the AFC Disciplinary and Ethics Code.

According to the AFC Disciplinary and Ethics Committee’s decision, the South Korean coach will have to pay a $5,000 fine and be suspended for four friendly games, including the automatic suspension during the SEA Games finale.

A repeated violation of this provision may be met with more severe punishment, the AFC added.

Vietnam’s next international friendly is scheduled to be held next month when they take on Iraq in preparation for their 2022 FIFA World Cup Qualifiers campaign.

Park started his job as the manager of the Vietnamese national men’s football team in late 2017.

During his spell, Vietnam finished second at the under-23 Asian championship in January 2018, claimed the fourth-place of the Asian Games tournament in August 2018, and won the trophy of the ASEAN Football Federation (AFF) Cup in December that year.

Vietnam also advanced to the quarters of the 2019 AFC Asian Cup, where they lost 0-1 to Japan.