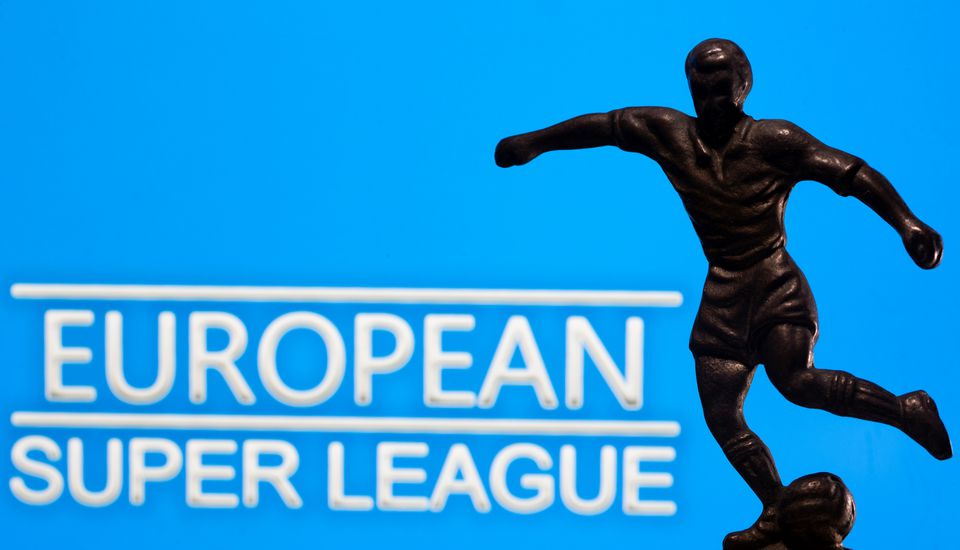 The breakaway European Super League, rocked by the departure of its six English clubs on Tuesday, said it would focus on efforts to "reshape the project" while stopping short of declaring outright defeat.

Having triggered an enormous backlash from players, fans and football authorities, the league was reduced to three teams each from Spain and Italy within 48 hours of its launch on Sunday.

Inter Milan look set to be the next to leave with a source close to the club telling Reuters they were no longer interested in the league "in light of the latest developments".

While the Super League beat a hasty retreat late on Tuesday, it offered no apologies.

"Despite the announced departure of the English clubs, forced to take such decisions due to the pressure on them, we are convinced our proposal is fully aligned with European law and regulations," the league said in a statement.

"Given the current circumstances, we shall reconsider the most appropriate steps to reshape the project, always having in mind our goals of offering fans the best experience possible while enhancing solidarity payments for the entire football community."

Pundits declared the league dead in the water, its clubs' hopes of carving up a bigger slice of global soccer revenues undone by their own greed and hubris, as well the combination of fan power and the threat of sanctions.

But the shockwave from the Super League's implosion is now set to reverberate through football, with recriminations and score-settling expected at clubs and boardrooms across the continent.

Manchester United executive vice-chairman Ed Woodward announced his resignation shortly before his club gave up on a project he had been influential in bringing about.

More will be expected to follow, including Juventus chairman Andrea Agnelli, called out by UEFA President Aleksander Ceferin as the "biggest disappointment of all".

Ceferin held out an olive branch to clubs that turned away from the Super League but he may struggle to forgive his former ally Agnelli, who was head of the European Club Association and a member of UEFA's executive board until Sunday.

Having painstakingly negotiated a new 36-team format for the Champions League, UEFA were humiliated by the Super League push, with Ceferin saying the governing body now knew who the "snakes" were.

The remaining Super League clubs are nonetheless likely to be welcomed back to Europe's established competitions given UEFA can ill-afford to forgo the revenue they bring.

Amid the cheers from fans as the Super League unravelled on Tuesday, anger remains. Pundits said the owners of the British teams would not be forgiven despite their U-turn and urged them to give up their interests.

The owners may merely pause and regroup before exerting more pressure on UEFA, which has staved off several threats of breakaway leagues over decades.

"The European Super League is convinced that the current status quo of European football needs to change," the ESL said.

"We are proposing a new European competition because the existing system does not work."