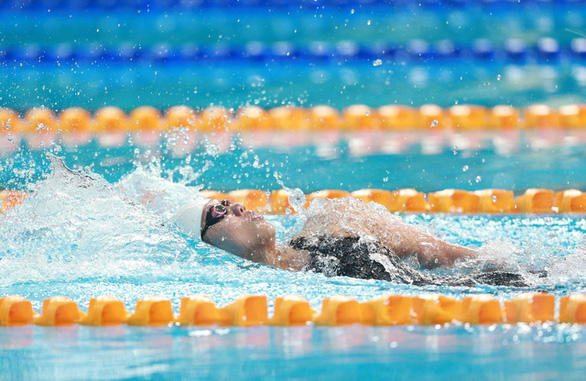 Nguyen Thi Anh Vien, who is considered Vietnam’s top swimmer, has expressed her desire to retire as a professional swimmer, creating concerns over the country’s competence in future international and regional games.

Vien proposed her retirement to the Ho Chi Minh City National Sports Training Center not long after returning empty-handed from the 2020 Tokyo Olympics in August.

She asked not to be called up to the national team and wanted to give up professional swimming due to her age and continuously slipping form.

Vien affirmed she had considered her decision carefully and wanted to spend the near future completing her study at the University of Sports Ho Chi Minh City and take time to focus on her personal life.

She had retired once before, in 2020, but decided to return to swimming.

Currently, all related parties are encouraging her to continue and compete at the delayed 2021 Southeast Asian (SEA) Games, set to take place in Hanoi in May 2022.

Vien, 25, is the most successful Vietnamese swimmer in history.

Considered a ‘treasure’ of Vietnam’s swimming, the talent was spotted and polished by the military’s sporting unit when she was only 11 years old.

During over a decade of her professional career, Vien has won 25 SEA Games gold medals, a silver and a bronze at Asian tournaments, two bronzes at Asian Games, a Youth Olympic gold, and many more.

She has dominated domestic swimming in Vietnam for years, holding many accolades and records.

Vien participated in the 2016 and 2020 Olympics but could not make it past the first round in both events.

Although the swimmer has been in a form slump since 2017, Vietnam’s sports administrators did little to nothing to intervene.

During the eight-year period, which included several training trips in the United States, Vien was left to her coach, Dang Anh Tuan, who was in charge of taking care of the swimmer from A to Z, along with some U.S. experts.

The lack of regular inspections and evaluations on Vien’s training makes the efficiency of the heavy investment in the swimmer ambiguous.

The sports administrators also took no action when Tuan reported that Vien had suffered depression or there were reports that the male coach had paid insufficient attention to the star swimmer.

Ignoring all those issues, all are happy whenever Vien brings home another gold medal haul from a regional competition, such as the SEA Games, and national tournaments.

With the original target of the investment in Vien directed at international achievements, this overall satisfaction has raised many eyebrows.

Vien has not received training from a personal coach for two years, with her performance continuing on a poor streak, after Tuan left his job at the national swimming team following a debt scandal in January 2020.

As she is considered not young enough to keep pursuing a professional swimming career, her decision to retire is understandable.

While there has been no official response to Vien’s proposal to retire from professional competitions, sports experts are counting on the possibility.

As the host of the 2021 SEA Games, Vietnam’s sporting delegation targets to finish atop the medal standings.

However, Vietnam may be unable to grab hold of at least five gold medals at the regional sporting event in the absence of Vien.

The military’s sporting unit, which had discovered Vien’s talent and has managed her at the club level, is also likely to lose its leading position at the national swimming championship, where the swimmer won 14 out of the unit’s 17 gold medals in its 2020 edition.

The only competitions in which Vietnam will not be affected by Vien’s retirement are the Olympics and Asian Games, where the country has secured a mere total of five medals and 17 gold medals after 16 and 11 appearances, respectively.