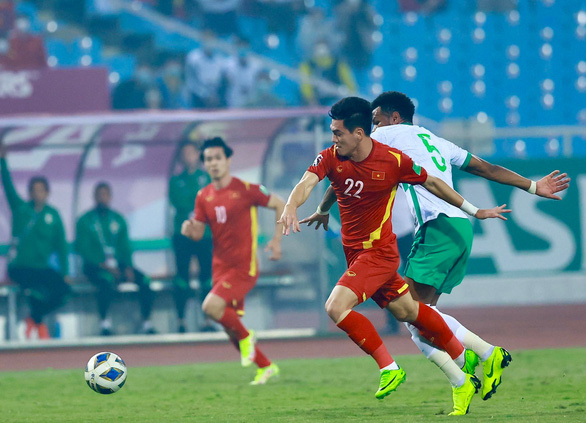 A solid performance was not enough for Vietnam to avoid a defeat against Saudi Arabia in Hanoi on Tuesday night, their sixth loss in a row in the 2022 FIFA World Cup qualifiers.

The hosts were offensive from the start of the game, hoping to break their series of losses with fan support on home soil at My Dinh National Stadium.

But they suffered another defeat in the final round of the World Cup qualifiers, and the second against Saudi Arabia.

Saudi Arabia almost scored in the fourth minute after a dangerous cross from the right flank, but there were no players that could touch the ball inside the box.

The Saudis had the lion's share of ball possession and shaped a low block in the next minutes.

Saleh Al Shehri scored in the 31st minute, heading it in from a cross from the right.

Vietnamese keeper Bui Tan Truong tried to save the ball but it already went over the line.

Saudi Arabia almost netted again with a tap-in by Salem Al Dawsari just two minutes into the second half, but Truong was quick to catch the ball cleanly.

The Green Falcons increased pressure on Vietnam after that, before scoring again in the 78th minute.

However, after reviewing the situation on VAR, the referee disallowed the goal as Vietnamese defender Nguyen Thanh Chung had been fouled.

Vietnam mounted several strong attacks toward the end of the game, but none of them bore fruit.

The victory cemented Saudi Arabia’s top position in Group B with 16 points after six games in the final FIFA World Cup qualification round.

Vietnam remain at the bottom of the group with zero points.

They will play Australia again in January and China in February.