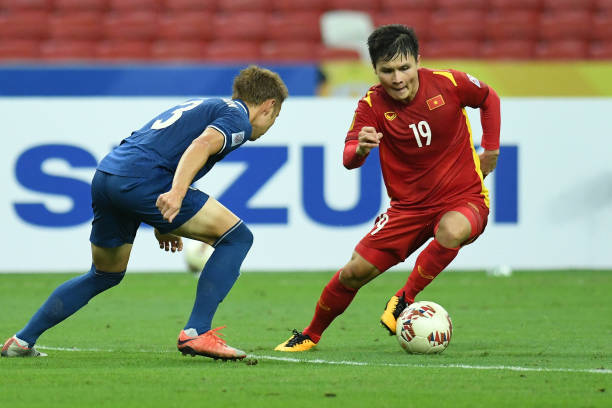 Vietnam tasted the bitterness of defeat for the first time in their campaign to defend their AFF Suzuki Cup title on Thursday night after losing 0-2 in the first leg of their semifinal against Thailand.

Both teams started the match, held at the National Stadium of Singapore, with aggressively offensive play.

Thailand netted the first goal after left-winger Nguyen Phong Hong Duy slipped while attempting to cut off a pass, allowing Thai captain Chanathip Songkrasin to race ahead and clip the ball past Vietnamese keeper Tran Nguyen Manh in the 14th minute.

Vietnam’s thin defense line and lack of a coordinated offense continued to cause the team to struggle in the first half, creating an opening for Chanathip to sink a second goal in the 23rd minute.

He exchanged a series of quick passes with Teerasil Dangda and Sarach Yooyan to break through the Vietnamese defenders and clinically score in the box.

Nguyen Quang Hai sent a 34th minute free kick crashing off the post before Thai goalkeeper Chatchai Budprom escaped with a yellow card after inexplicably racing out of his area and dragging down striker Nguyen Van Toan.

The Thai goalkeeper's case was just one of many controversial decisions referee Al-Adba Saoud Ali made during the match.

Vietnam, who had not conceded a goal in their four group games, missed a shot for the second time as Hai’s left-footed effort from the edge of the box hit the crossbar in the 67th minute.

The rest of the match was filled with missed shots on goal by Vietnam.

Things could have been even worse for the Golden Stars if not for a penalty save by Tran Nguyen Manh on 84 minutes as he denied Chanathip's hattrick.

Vietnam had two penalty shouts of their own waved away in stoppage time as Tristan Do pushed Hai down in the penalty area and the ball struck the hand of substitute Weerathep Pomphan.

Defending their title will be a tough challenge for Vietnam due to the defeat.

The Golden Stars must now beat Thailand by at least three goals in the second leg of the semifinal this Sunday to meet either Indonesia or hosts Singapore in the final next week.

The contestants were divided into two groups.

Title defenders Vietnam, who claimed a 3-2 aggregate triumph over Malaysia in the 2018 AFF Suzuki Cup finale, were randomly selected for Group B alongside Malaysia, Indonesia, Cambodia, and Laos.