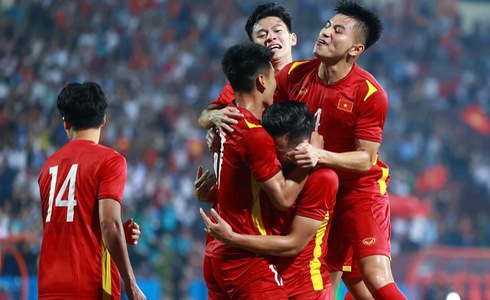 Vietnam overwhelmed Indonesia with a 3-0 win in their opener in Group A of men’s football at the 31st Southeast Asian (SEA) Games at Viet Tri Stadium in northern Phu Tho Province on Friday night.

Vietnam are the defending champions of the category while Indonesia are the runners-up after the final at the 2019 SEA Games had ended 3-0 in the Philippines in the former’s favor.

Both sides played it safe in most of the first half, during which nothing was remarkable but six yellow cards were equally shared by each side.

The two teams held each other back to a goalless draw by the interval.

Just nine minutes after the restart, Nguyen Tien Linh tapped in Le Van Do’s cross from the left flank to open the score for Vietnam.

As the Golden Dragons got more confident, they scored the third goal in the 88th minute.

After Le Van Xuan dribbled and finished off the bar, Van Do made a shot from outside the box that went in to goalkeeper Adi Satryo’s surprise.

Indonesia could make no changes in the four added minutes and saw Vietnam get off to a great start with the 3-0 victory.

The results put Vietnam second in the standings, behind the Philippines, who thrashed Timor Leste 4-0 in Group A’s opener earlier on the same day.

The fixtures of Group B, which includes Singapore, Laos, Thailand, Malaysia, and Cambodia, will commence on Saturday.