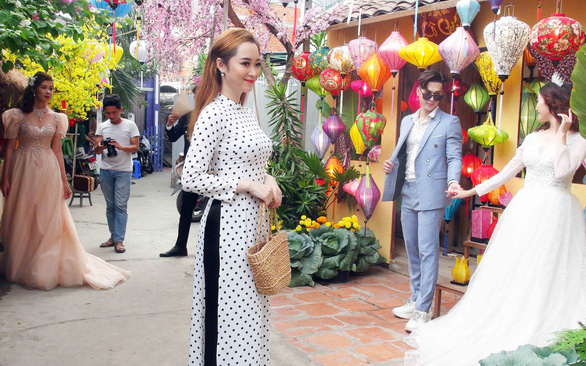 Visitors to the Mekong Delta city of Can Tho have been attracted to an alley in Cai Rang District in recent days for the 'Instagrammable' decorations that bring back memories of Tet in the old days.

In the festive atmosphere of the Lunar New Year - the most anticipated holiday in Vietnam that will fall on January 25, 2020, Nguyen Minh Nhat, a Cai Rang local, has turned the alley leading to his house into a colorful attraction decorated in the theme of spring.

Having been given the green light by local authorities and residents, Nhat created the ‘Spring Street Corner’ – a recreation of how the Lunar New Year, or Tet, was celebrated throughout the northern, central and southern regions of Vietnam in the old days.

Nhat spent VN150 million (US$6,500) of his own money and more than half a year preparing for erecting multiple booths in the alley, each featuring an aspect of Tet in each of the aforementioned regions.

The man traveled all the way from Can Tho to the central province of Quang Nam – home to one of the most famous traditional craft villages in Vietnam – to buy 500 lanterns.

He also visited the Mekong Delta province of Dong Thap to place an order for 1,500 ears of corns, and Hau Giang Province to search for bamboo kitchenware.

Corn was a common offering to ancestors during Tet in the past, while the lanterns Nhat bought are used to illuminate the alley, evoking the tender atmosphere of the holiday in the central region.

The 33-year-old told Tuoi Tre (Youth) newspaper that there were ancient items such as the old-fashioned TV and wooden silk reel that were really difficult for him to find.

“I want to remind people of the ancient Tet, […] to help visitors know how our ancestors celebrated Tet,” said Nhat.

In addition, Nhat also recreated paintings printed on old stamps issued decades ago to display in a separate booth.

Other booths feature calligraphy works, ‘banh tet' – a glutinous rice cake typically eaten in southern localities during the Lunar New Year – and bamboos and wells, which are two typical features of Tet in the northern region.

As Nhat’s recreation has been receiving great applause from locals and visitors alike, the man said that he will try to come up with new ideas to decorate the alley in the next years.