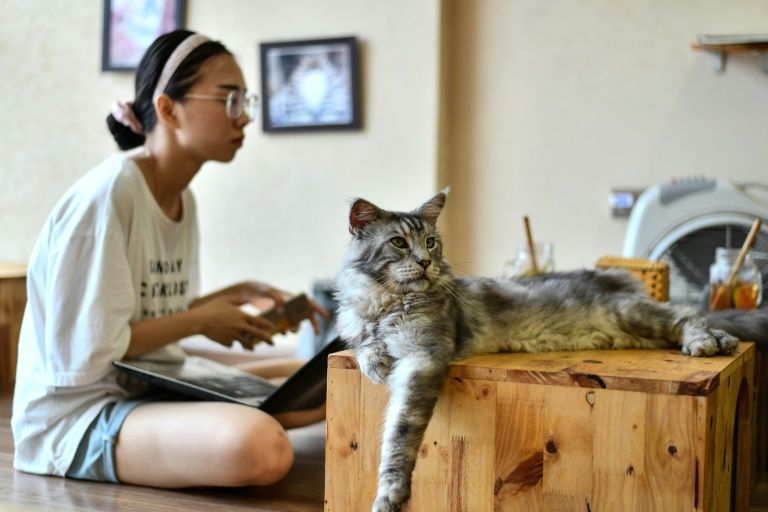 If your idea of the purr-fect day is spending it curled up with convalescent rescue cats and a coffee, then one cafe in Vietnam has you covered.

Ngao's Home Cafe in Hanoi is a loving home for 15 felines, many of whom were abandoned or found injured after being bitten by dogs or suffering serious accidents.

"I try to help cats with difficult backgrounds, to heal their physical and mental wounds," said 24-year-old cafe owner Nguyen Thanh Binh ahead of International Cat Day on Saturday.

The cafe has clawed its way up the favorite list of many cat lovers since it opened last month, offering coffee and cuddles but also the chance to give the animals medicine and even engage with them on a deeper level.

"When I come to this cafe, apart from playing with the cats, I can hear their stories and empathize with them," 20-year-old student and customer Le Hoang Yen told AFP.

Many cats in Vietnam are cherished pets but others are sold for their meat, which is considered a delicacy in parts of the country.

Thieves have been known to steal cats which can then be sold on for consumption.

Owner Binh was inspired to start the coffee house, which runs as a non-profit, after spotting cats in cages, and others who had been injured by thieves.

"Once me and my friends have the cats, we first bring those who with injuries or medical problems to a vet. Then when they get better, I take them here to the cafe for even better care," he said as he stroked a fluffy white feline, blind in one eye.

He also hopes one or two customers might be tempted to take home more than a coffee.

"I will help them find new owners — ones who really love them."