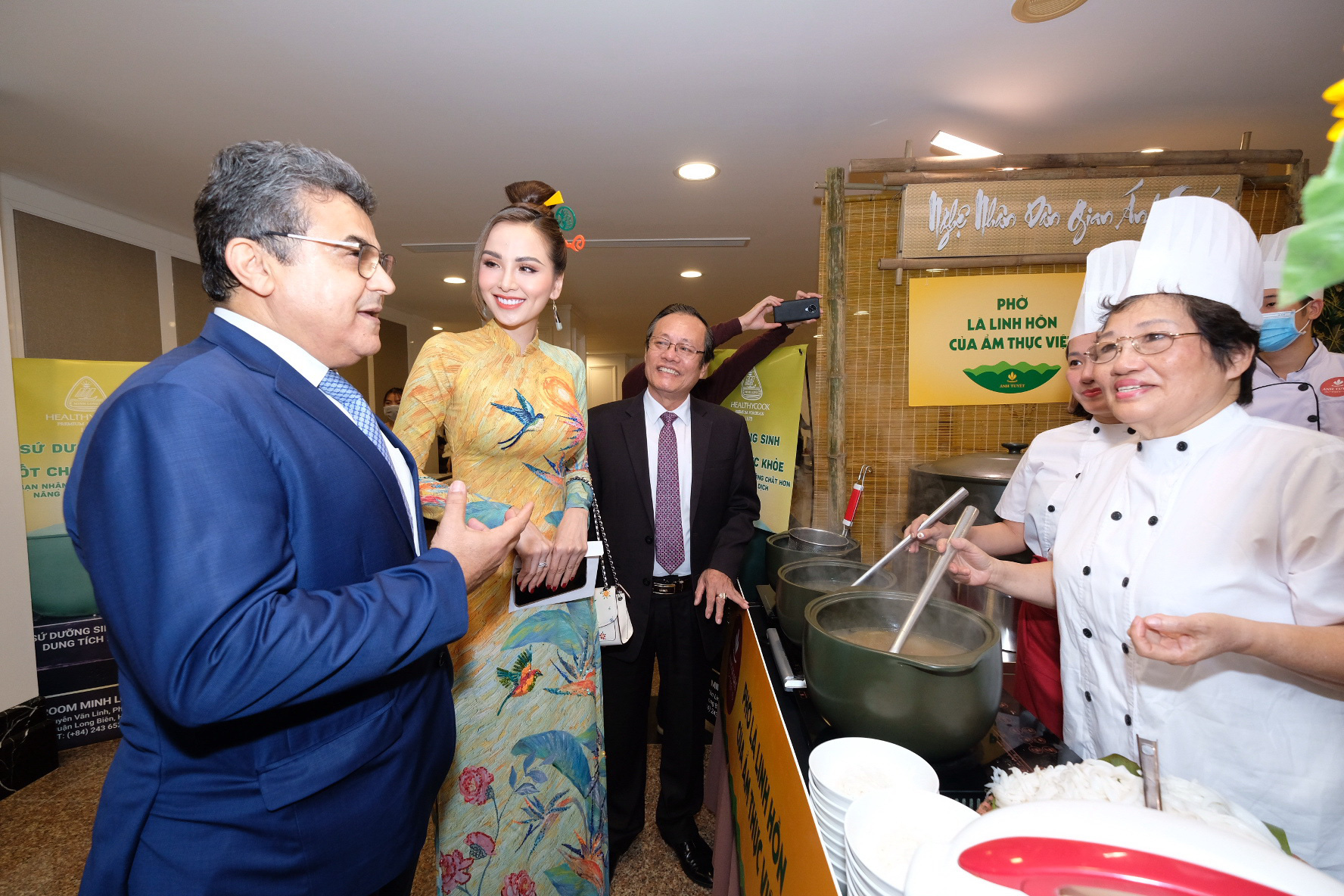 A gala dinner titled ‘The Story of Pho’ was organized in Hanoi on Thursday evening within the framework of this year’s ‘Day of Pho’ event, attended by diplomats from the U.S., France, Japan, South Africa, Argentina, and some Southeast Asian nations.

Held by the Ministry of Foreign Affairs and Tuoi Tre (Youth) newspaper, the event attracted nearly 100 people including many diplomats, politicians, and representatives of international organizations and foreign news agencies.

The gala was organized for the first time within the framework of the annual ‘Day of Pho’ event, which has been celebrated on December 12 every year since 2017.

Participants were invited to have a feast of various types of pho and listen to interesting stories to have an insight into the dish, which is considered the essence of Vietnamese cuisine.

Participants and international friends said “I love pho” all together at the end of the gala dinner, after they experienced different emotions brought by unique bowls of pho and fascinating accounts of the Vietnamese food.

“Pho is very delicious,” Furudate Seiki, first secretary of the Embassy of Japan in Hanoi, said after enjoying five bowls of pho at the gala.

Pho is the first dish Japanese people think of when they talk about Vietnamese cuisine, Seiki said, adding that the noodle soup is so popular and loved in Japan that many pho restaurants have been opened there.

He hoped that more events similar to ‘Day of Pho’ will be held in the future to promote Vietnamese cuisine as well as other products made from Vietnamese rice.

Yully Yudhantari Saputri, third secretary of the Embassy of Indonesia in Hanoi, was among the early birds to visit each stall of pho with excitement.

“I have been longing for today since I heard about the ‘Story of Pho’ gala for diplomatic missions as it’s rare to join an event that serves Halal pho, which Muslims can enjoy at ease,” Saputri elaborated.

“Pho with thinly sliced beef is popular yet I have just been introduced another version of wine sauce pho with rich soup and beef chunks. I am looking forward to trying it today.”

Saadi Salama, Palestinian Ambassador to Vietnam, said he was a big fan of pho, especially chicken pho, adding that he could name a series of famous pho shops in Hanoi.

“I eat pho at least once a week. The best thing about the dish is the sweet and delicate broth. It is easier to cook chicken pho than beef pho, but the pho noodle strings have to meet some standards to make a perfect dish,” Salama remarked.

According to Kellee Farmer, cultural attaché and acting press attaché of the U.S. Embassy, the gala dinner gathered most famous pho restaurants in Hanoi.

“There are a variety of pho restaurants along the alley where I live, yet to enjoy different types of pho at the same space is a different experience,” she said.

“Pho is a popular dish in the U.S. but eating pho right in its homeland brings special feelings. When you have a chance to visit the U.S., I would like to invite you out for a bowl of pho to see how different it is between pho in the U.S. and pho in Vietnam.”

Speaking at the event, Deputy Minister of Foreign Affairs Nguyen Quoc Dung said that cuisine is the crystallization of a nation’s culture and philosophy, and is a guide to the traditions of a country and people.

“There are many dishes that have become associated with their homeland and people – take Japanese sushi, Indian spicy curry, Italian spaghetti, or French cheese for example. In Vietnam, hardly any food is more inextricably linked to who we are than pho.”

“As time flows, pho follows Vietnamese people to travel around the world, giving Vietnamese citizens abroad a precious sense of belonging, of shared identity, and the heartstrings linking them with their motherland and compatriots. As a tool for people-to-people diplomacy, pho has served as a bridge of friendship, helping to boost mutual understandings between Vietnamese expatriates or travelers and their local friends.”

Dung praised Tuoi Tre’s initiative in organizing the ‘Day of Pho’ on December 12 for the past four years, as well as the first pho-themed gala dinner.

Pho is a dish that all foreigners must try when they visit Vietnam, Kajiwara Junichi, general director of Acecook Vietnam JSC, said, adding that the ‘Day of Pho’ event each year will help Vietnamese people become more proud of their national dish.

Acecook has also been contributing to the promotion of the dish via its made-in-Vietnam instant pho, which has been exported to over 40 countries.

According to Le The Chu, chief editor of Tuoi Tre, pho is a classless dish as it is for both the wealthy and the underprivileged.

Vietnamese people love to enjoy pho for any meal during the day, Chu said, adding that pho is not only a delicious and healthy dish, but also one of the typical features of the Vietnamese culture, cuisine, and people.

“Each year’s ‘Day of Pho’ event shines a light on a new and interesting perspective on the Vietnamese pho and its value. Our humble goal is that pho in a restaurant, in the kitchen, or in any part of the world shall bear the true taste of pho.”