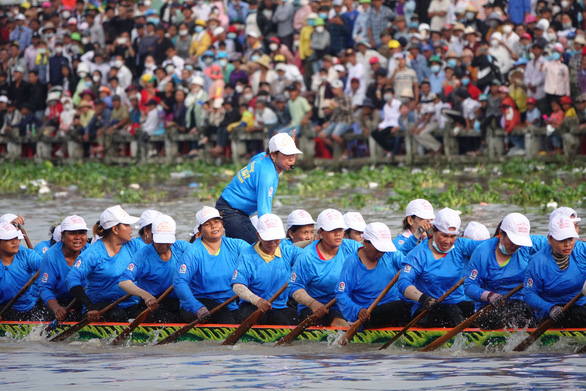 More than 6,000 athletes participated in Ngo (Khmer) boat races on the Maspero River in Vietnam’s Mekong Delta province of Soc Trang on Monday and Tuesday.

The races, which are recognized as national intangible cultural heritage by the Ministry of Culture, Sports and Tourism, wrapped up the Mekong Delta’s week-long Oc Om Boc Festival, or the moon worshipping festival celebrated by the Khmer ethnic people in Soc Trang.

The boats are decorated with images of dragons, tigers, elephants, lions, and peacocks to show their power.

Thousands of spectators cheered for the participants during the two days of competition.

Two teams from Soc Trang won the highest prizes in both categories as the races concluded on Tuesday.

Ok-Om-Bok is one of the three major festivals that Khmer people celebrate every year, along with the traditional New Year Festival Chol Chnam Thmay and the Sene Dolta for remembering ancestors.

It often takes place around the 15th day, or the full-moon period, of the tenth lunar month, after the harvest season.

Soc Trang is home to the largest number of Khmer people in Vietnam with more than 400,000, making up 31 percent of the provincial population, according to the Vietnam News Agency.